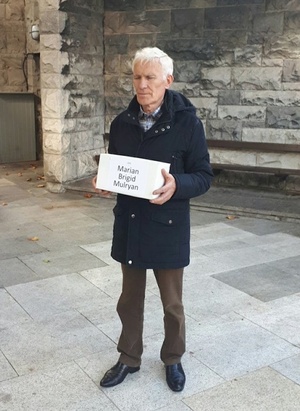 Peter Mulryan lived in the Bon Secours Mother and Baby Home in Tuam, County Galway for four and a half years before he was adopted out. He believes a sister called Marian died at the home or was trafficked out of Ireland as a child.

The Joint Oireachtas Committee on Children, Disability, Equality and Integration is discussing the Institutional Burials Bill.

The proposed legislation will allow excavations and re-interment of remains at former mother-and-baby home institutions. Coroners will not have jurisdiction in respect of bodies exhumed from sites

Chairman of the Tuam Home Survivors Network, Peter Mulryan, who will address the committee this afternoon, had sought legal advice as to whether the committee was acting within its powers in considering the Bill.

It has two clear objects, (1) to circumvent existing law by dispensing with Inquests into the deaths of children lying in mass graves at Tuam, Bessborough, Sean Ros and (2) to clear the way for the commercial developments on other sites which are stained with the cruelty to generations of Irish women and children.

Neither, am I aware of when responsibility for dealing with unexplained deaths was removed from the Coroners Service, the Department of Justice or An Garda Síochana to this “Children’s Department”

But perhaps the members of the Committee know best. They are perhaps better educated than I was. I was simply a hungry and frightened child in the Tuam ‘Home’ before being ‘boarded out’ as a child farm labourer in a cruel environment. They have ‘satisfied’ themselves that they are acting lawfully.

I am aware of course that it is ‘customary’ that the advice of the Attorney General is not published. I simply asked the Committee if they had sought advice. Their reply was to tell me to ‘take a hike’ that it was none of my business, whether they had or not.

I find their reply whether intended to be or not, offensive. I find it insulting and disrespectful.

My sister who I never met and who has no recorded burial place, lies in the Tuam cesspit into which hers and the bodies of other infants were thrown.

Not a single “Medical Certificate” is to be found for the children of Tuam.

Their Death Certificates are works of fiction.

This Committee now sits to consider a Bill which denies my sister and so many other children, even the dignity of possibly determining her cause of death.

Shame, I say. Shame on you all for even looking at this get out of jail card for the State and the Institutional Catholic Church.

I do not want your soft words.

I do not want your sympathy.

I want justice for all the children whose lives were lost due to the indifference and cruelty of Church and State.

I note that the only amendments to this Bill since the departure of Mr Woulfe and the creation of this new Government are designed to ensure that the owners of the sites where these children lie, are are adequately compensated for any inconvenience when removing the bones of the children.

It would indeed be a crime if the dandelions and weeds that sprout from mass graves of children were to be disturbed before these lands are converted into commercial developments.

Tread softly, for you tread on the bones of my family and those of my fellow survivors

The Irish Council for Civil Liberties (ICCL) is calling for the Institutional Burials Bill to be significantly reformed.

ICCL and others believe this [not having a coroner] could impede an effective investigation into the cause and circumstances of death.

Overall, it believes the bill is inconsistent with a transitional justice approach.