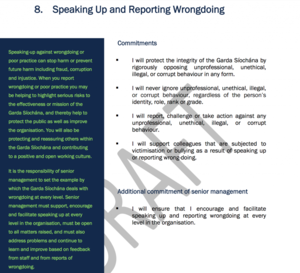 Page 12 of the Policing Authority’s draft Code of Ethics

The Policing Authority must establish a Code of Ethics for the gardaí by the end of the year, having already created an initial 15-page draft code.

It’s now inviting members of the public, gardaí and civil society groups to make submissions by close of business on Friday, September 23.

This call for preliminary views and comments is an important opportunity for interested members of the public, employees of the Garda Síochána, civil society organisations and relevant statutory bodies to offer their views on the Code.

In particular we would invite views on:

– whether there are any issues of concern not covered by the draft Code,
– whether there are any issues which should be addressed differently,
– any examples that you think should be included in the Code to demonstrate what would constitute good ethical behaviour or alternatively, examples of what would constitute a breach of the Code, and
– any other comments or feedback

Submissions can be emailed to info@policingauthority.ie or posted to The Policing Authority, Fourth Floor, 90 King Street North, Dublin 7