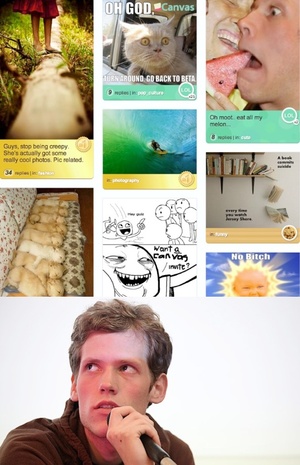 They’re calling it ‘4chan for grown ups’. 4chan has other names for it.

Canv.as, which has raised $3.6 million in venture funding, is an unprecedented attempt to monetize the meme-making process 4chan perfected over seven years of troublemaking. Like 4chan, the site is based on users uploading and remixing funny pictures and .gifs. But Canv.as is supposed to be a clean, well-lighted place for memes —its three rules are “keep it safe for work,” “Don’t be mean,” and “Stay on topic.” It’s the polar opposite of 4chan’s meandering, porn-infested boards.