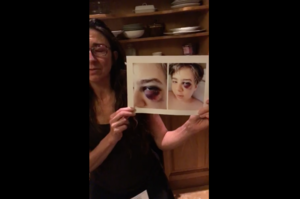 Dublin mother-of-two Adrienne Murphy, whose 14-year-old son Caoimh is severely autistic, posted a video in which she makes an emotional plea for the HSE to provide her son with residential care on Tuesday evening.

She spoke of the harrowing conditions in which she and her two sons live.

“My name is Adrienne Murphy.

“I’m the mother of a beautiful, 14-year-old severely autistic boy called Caoimh. I have been fighting for him really hard for 15 years. I’ve managed to, despite the fact that he’s very severe, and incapable of speaking, I’ve managed to break him out of a locked-in state the past two years.

“I’ve taught him how to point out of a letter board, he has shown that he is highly intelligent and very sweet-natured, beautiful.

“He also experiences psychotic, regular, increasingly more violent, psychotic episodes where he is very, very self-injurious – smashing his hands against hard surfaces and beating his head off walls, to the point that he draws blood and bruises himself.

“And he’s violently aggressive towards me and me other son who’s also a minor, to the point that, in the last two years, we’ve had seven interventions by the emergency services, 999 calls having to be made from my home.

“The police, ambulances, the fire brigade, seven times I’ve been brought to A&E because of his violent behaviour is out of control.

“The last time he was removed from the house, I had to dial 999, he was smashing up the house, he was completely naked and completely insane.

“The police came and the ambulance, they grabbed him onto a trolley and they handcuffed him naked and they brought him from the house, screaming and shouting with a towel over his head to be brought to the A&E service for sedation.

“I spent a week with him on a ward in Crumlin’s Children Hospital during which time he had two further violent outbursts which required physical restraint, multiple security men and further sedation.

“But I was let go, after a week, and I had to bring him home and continue to look afar him. At that time, I requested…the HSE know I’ve been in a crisis for years. I requested emergency residential care for my son because clearly his needs are gone way beyond my ability to care for him at home, even though it’s heartbreaking for me and I wanted to keep him at home.”

“This is a picture of my beloved boy and what happened to his face last June, [inaudible] physical restraint, by black eye, that he’s lucky that his cheekbone wasn’t broken.

“I’m doing this [broadcast] because I was promised, the HSE promised me, four months ago, that funding was in place, that they realised, they said that they know we’re an emergency situation. That’s he’s gone to the top of their list for autistic, young people who require residential care.

“They said that the funding was in place, that funding isn’t an issue, they have the green light and the funding.

“Now, a service has been found, it can fit his needs, they have the expertise to deal with him and the experience, they’ve deemed him eligible for the service.

“There is a place for the service, there are vacancies at the service and last week I thought he was going to begin the admission into that placement.

“Instead, last week, a whole load of procedures, a very cruel email was sent to me, saying no, that is not the case. Many, many more procedures have to take place apparently even though huge amounts of information, professional reports about my son have gone to the service.

“Now they say more observations of him in the home setting is required, they don’t know when that observation is going to take place, maybe weeks, sometime over the next weeks, and then maybe he might be suitable for a possible placement.

“I know that there is an empty, standalone unit at that service that he could be brought to immediately.

“…we are living in brutalising, dehumanising conditions because Caoimh is, as well as being severely disable, he can’t even wash his own hands, he’s doubly incontinent at night.

“He’s nearly the same height as me by the way and extremely strong.

“He’s locked in there at night because if he gets out at all, and I don’t hear him, I’m so exhausted, that if I don’t hear him he could easily come down, get knives, smash glasses.

“He’s doubly incontinent at night, including bowel movements twice at night. He has a commode in his room but he can’t use it independently, hygienically.

“If I don’t get up twice a night to help him which often I can’t, I’m just so exhausted, I will…and in fact, maybe six out of seven nights, I’ll open Caoimh’s door to find him covered in his own excrement in the morning.

“And he even eats his own excrement.”

About two hours ago, Ms Murphy updated her Facebook in which she wrote the following:

Caoimh and I are currently in Crumlin Children’s Hospital where we are being looked after by the wonderful staff here.

1. So far, so silent from the HSE. In spite of the mounting pressure neither Minister Harris’ office or the HSE has made any contact with me.

2. The HSE case workers dealing with Caoimh could have him sorted into the place for which he has been assessed as eligible, in minutes. But they won’t do it – the last contact from them about the residential place was that many more assessments needed to be made, there was no particular time period for these assessments (when pressed they said possibly sometime in the next few weeks), that he was not guaranteed a place there regardless and then there might be more assessments and other obstacles that needed to be overcome.

3. We are demanding that if any further assessments need to be made then they need to take place where Caoimh is safe – either at the residence in question or at Crumlin Children’s Hospital.