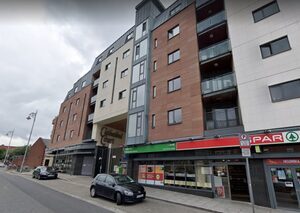 Cathedral Court, Dublin 8 (above) a development by Sherbourgh Enterprises owned by members of the O’Callaghan hotel family.

The Irish Times revealed recently that Sherborough Enterprises, controlled by members of the family that owns the O’Callaghan hotel group, expects apartment owners at Cathedral Court in Dublin 8 to pay more than €5,000 each to repair building defects in an apartment block that it built and still partly owns.

The developer of a Dublin 8 apartment block with serious building defects has gained control of the board of the block’s owners’ management company (OMC).

…Three members of the O’Callaghan family – Noel, Paul and Charles O’Callaghan – are now on the board after a vote was held at an EGM last week.

Of the four private owners who put their names forward to join the board, two were elected.

Cearbhall Beggan, a private owner who had been on the board alongside Paul O’Callaghan for the last number of years, resigned in protest before the vote took place.