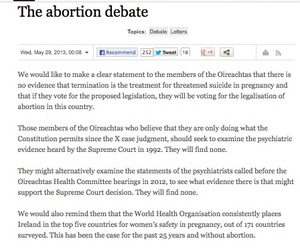 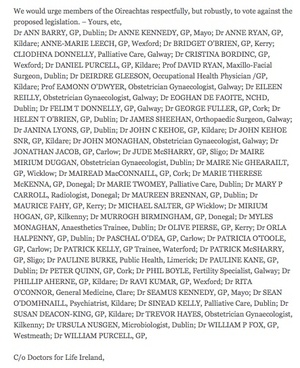 The group of GPs calling themselves “Doctors for Life Ireland” who published an anti-choice letter in today’s Irish Times are, like many parts of the anti-choice movement, not as cuddly as they first appear.
Until recently they [Doctors for Life] called themselves “Irish Catholic Doctors Association” with a far broader remit than just anti-abortion Indeed, their website front page currently contains the line: “The connection between contraception and abortion is primarily this: contraception facilitates the kind of relationship and even the kind of attitudes and moral characters that are likely to lead to abortion.”
That’s a medical opinion, apparently. And coincidentally, their “development officer” is none other than
Sean O Domhnaill of #oircom fame

Dr Patrick Kelly, a signatory to the letter, writes:

Your reporter has incorrectly attributed the signatories to a group called the Irish Catholic Doctors Association.
I, like many of the other signatories did not sign this letter as part of this group as alleged by the journalist. I signed it in the context as it appears in the Irish Times (above) and the Irish Independent.
…I would appreciate if you could editorially clarify that this letter was not submitted as support for the ICDA when this is in no may mentioned in the letter nor did it appear on their website to our knowledge.