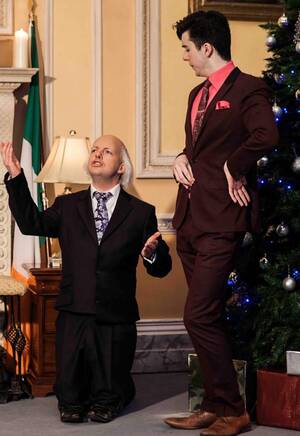 Mr Hardie said the Barry Murphy-led series Irish Pictorial Weekly was the best satire “I’ve seen in any country for a long while.”

Conor Brophy: “Did you bat those things around though in terms of whether you would actually go down that direction or not, because I’m thinking one of the things you don’t want to do is get into belittling people because of the way they appear.”

Sean Hardie: “It’s a very difficult one that, because sometimes what you want to try to do is get the essence of what a persons like. So, if someone is like a bear or someone is like a cow or someone is like a monkey, it’s a very useful image to have in your mind and their physical body language is bound up with it. There’s a very interesting case in point with Oliver Callan and our president as to whether you reference the fact of what our president looks like.
I mean Oliver is a terrific impressionist. It’s an awkward kind of an area as to whether…I mean the fact about Michael D is – he’s a great man, he’s done wonderful things and his heart is exactly in the right place but he’s a terrible old gasbag and when you see him walking out and representing the nation, there is something which says our dignity is not quite where it ought to be at the moment, which doesn’t belittle his achievements as a president but the physical thing is – do you do it, don’t you do it?
It’s a fine line. If all you’re doing is saying so and so has got a stutter, you’re not really achieving anything. But if it’s part of who they are, then yeah, it’s kind of fair game….”

The Media Show – a new 13 week series – began last night on RTÉ Radio One (Sundays at 7pm). Presented by Conor Brophy, the series will look at the pressing issues in the sector including ownership, diversity, press freedom and how digital media are changing the way content is delivered and consumed. Last night’s show featured NPR media journalist David Folkenflik profiling the new media tycoons, inside Al Jazeera from the point of view of two Irish journalists who have worked there and a celebration of the art of tabloid headline writing…