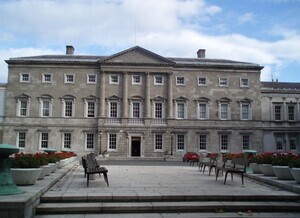 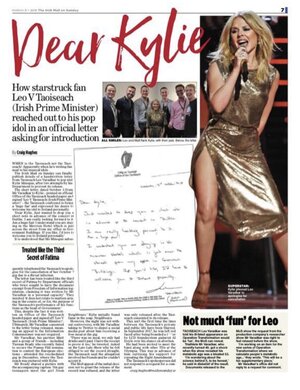 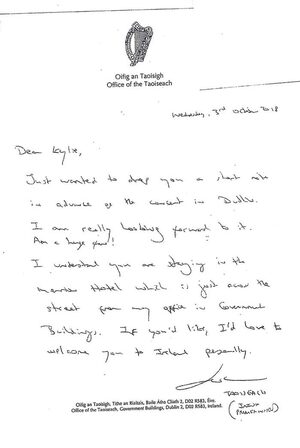 From yesterday’s Irish Mail on Sunday

The Irish Mail on Sunday reported on a letter sent by Taoiseach Leo Varadkar to pop star Kylie Minogue last October ahead of a scheduled gig in Dublin.

The letter, on Office of the Taoiseach-noted paper, said:

‘Dear Kylie, Just wanted to drop you a short note in advance of the concert in Dublin. I am really looking forward to it. Am a huge fan! I understand you are staying in the Merrion Hotel which is just across the street from my office in Government Buildings. If you like, I’d love to welcome you to Ireland personally.’

Mr Varadkar’s department twice told IMOS journalist Craig Hughes, who sought and eventually obtained the document under Freedom of Information, that the document was exempt from FOI legislation, saying it was written by the Taoiseach in a “personal capacity”.

But, the newspaper reported, the Taoiseach eventually consented to the letter’s release.

The Taoiseach wrote a begging letter for a meet-and-greet with Kylie on official headed paper. In the middle of Brexit, housing crisis etc. The Taoiseach! 🤦🏻‍♂️ A nation’s toes will never uncurl… pic.twitter.com/ezbp9RozFT

‘Dear Kylie’ – the starry-eyed fan letter from ‘Leo V Taoiseach’ to his pop idol asking for a meet and greet (Extra.ie)