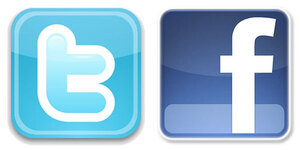 The Conseil Supérieur de l’Audiovisuel (CSA), has banned the use of the words ‘Twitter’ and ‘Facebook’ from the French airwaves.

Facebook and Twitter are, of course, American social networks. In France, they are regarded — at least implicitly — as symbols of Anglo-Saxon global dominance — along with Apple, MTV, McDonald’s, Hollywood, Disneyland, and other cultural juggernauts. That there is a deeply-rooted animosity in the French psyche towards Anglo-Saxon cultural domination cannot be disputed; indeed, it has been documented and analysed for decades. Sometimes this cultural resentment finds expression in French regulations and laws, frequently described, and often denounced, by foreigners as protectionism.

“Why give preference to Facebook, which is worth billions of dollars, when there are many other social networks that are struggling for recognition,” she said. “This would be a distortion of competition. If we allow Facebook and Twitter to be cited on air, it’s opening a Pandora’s Box — other social networks will complain to us saying, ‘why not us?’”

“Find the live coverage of the trial on our thread on the platform that allows the broadcast of 140-character messages.”