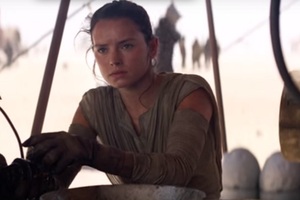 Daisy Ridley as Rey in Star Wars: The Force Awakens

Yesterday we started a campaign to help Alice Baker, a budding film director and producer living with Cerebral Palsy, to deliver a message to her hero Daisy Ridley.

Our campaign #ReyofHope: an Open Letter to Daisy Ridley went somewhat viral in the Star Wars universe yesterday, and was even supported and shared by Star Wars Actors like Mark Hamill (his tweet here), Julie Dolan, Princess Leia in Star Wars Rebels (her tweet here), and Ana-Maria Leonte (Dasha Promenti in Star Wars: The Force Awakens).

But we have not achieved Alice’s goal yet, we need to get the message as loud and as far as possible, and ultimately to Daisy Ridley. Mark Hamill is filming with Daisy Ridley right now (and soon will be in Ireland) and we are confident, with your readers help, that Alices’s message will reach its destination…

#ReyofHope: an Open Letter to Daisy Ridley (Blabba The Hut)