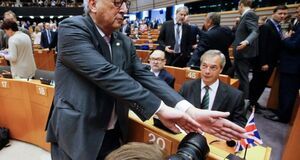 Last week’s Brexit vote, which the author signalled, was a triumph of hate over responsibility.

No surprise but one hell of a mess.

Some voted against the over bearing arrogance of the European Commission. Some recognised the continuing democratic deficit within the EU, although a country with an unelected head of State, second chamber, and without a written constitution is hardly best placed to be flag bearers for democracy.

As with most referenda many voted to get at the government. A government, whoever its new head is to be, that will now have free rein thanks to those who voted with their spleen.

Others spoke about getting rid of red tape. This was code for less consumer entitlements, less workers rights, less environmental standards.

However the phrase that worked, that stuck, was ‘taking our country back’. No code here. For those living in the neglected, discarded communities of Northern England and South Wales the easiest of answers were provided for their continuing plight.

For them it was made all too clear that all their problems were the fault of ‘Johnny Foreigner’.

My recent eight months on John Bull’s first island showed me how ugly public discourse had become there. The louder Nigel Farage and his ilk became the greater the licence given to those whose racist tendencies could now be given full flowering.

It will be difficult to put this genie back in the bottle. A genie, being an utterly inappropriate analogy, not being sufficiently British enough.

It could be that after two years of taking their country back there could be a realisation as to how deep a hole the country has dug itself into. By that stage an independent Scotland will be well on the way to being established, and the newly formed islet of Norn Iron will be nursed into being.

The likelihood is that another referendum will take place, not necessarily to overturn the decision now made, but to offer the alternative to EU membership that will have been agreed.

By that time the Sun will have finally set on the Empire. It may or may not change mindsets. The only certainty is that a terrible ugliness has been reborn. It is a triumph of hate over responsibility.

In Ireland we can’t afford to be too smug about these things. Scratch the surface in many of our discarded communities and we may see similar forces being unleashed.

Maybe the preoccupation with issues of lesser importance that have over involved us recently, have been something of a safety valve.

While I prefer an obsession over water than renewed racism at any time, in both our countries we continue to sideline the more important issues that are further marginalising those communities affected.

We should cry for all our beloved countries.