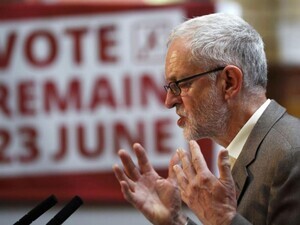 If Britain leaves the EU you can blame the dilettente left.

While the Brexit referendum has for the most part been a squalid squabble for the future of the Tory party (egged on by the Sun never sets on the Empire/Little Englanders of UKIP), a sub plot among the religious left has also been unraveling.

The British satirical magazine Private Eye (still miles ahead of its Irish copyist The Phoenix) has a regular character, Dave Spart, an irredentist anarchist/socialist who counter argues every issue, ridiculously, to conform to his obtuse orthodoxy.

I’m reminded of this character when I read the arguments of those in Britain, who position themselves on the left, and who argue for Brexit.

Except, as the contrarians that most of them are, that can’t even say the word Brexit lest they admit who their ideological bedfellows are. To overcome this difficulty they have come up with the term Lexit to maintain ideological purity.

Most involved are the usual suspects – the now cartoon-like George Galloway, the SWP in its People Before Profit incarnation, or Militant Labour/Socialist Party in whatever its current title is.

Add to that the tendency of the debating society left to constantly spilt, amoeba like, and you have all the elements needed for high farce.

I have read arguments from a group styling itself the Socialist Equality Party (is fascist equality possible?). The thrust of its arguments is that Brexit must happen to allow the conditions to exist to bring about a United Socialist States of Europe!

Even among Greens the temptation towards ridiculous argument exists. Its offshoot, no more than 5% of its membership, styles itself Green Leaves. Whether they eat and shoot is a moot question.

The most impenetrable character in this soap opera has been Jeremy Corbyn. I understand how he became Labour Party leader. The need to bury Blairite mendacity and blandness was necessary in that party. Had I been a member I probably would have voted for him.

What he seems to lack is any degree of passion.Or maybe this is his Machiavellian trait, a half paced half whispered approach to conceal his true intentions.

If that is the case it seems to be working. Most people in Britain don’t believe that he does oppose Brexit. At the very least his style has been laconic. Many of his statements have been open to alternative interpretations.

I feel it has more to do with his accidental leader status. Whatever about his sincerity, or his philosophical consistency, he lacks a gravitas that may end up being the ultimate barrier to his ever being British Prime Minister.

If this referendum is close, and if Brexit succeeds, this dilettante left will have had a lot to do with that.