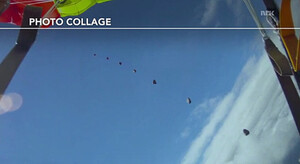 Behold what’s thought to be the first ever video footage of a meteorite falling to earth during its ‘dark flight’, or straight trajectory terminal velocity stage.

In the summer of 2012, Anders Helstrup  of the Oslo Parachute Club jumped from a small plane. His helmetcam records him deploying his chute and – seconds later –  a falling meteorite (travelling at about 300km/h) clearing him by just meters.