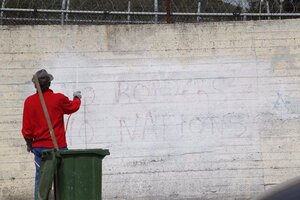 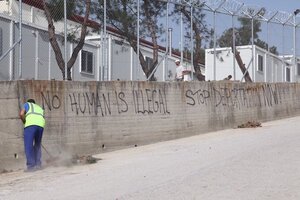 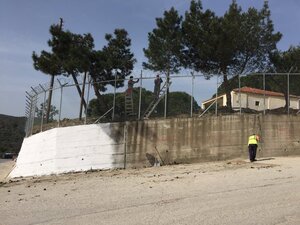 Clean-up time on Lesbos for Pope Frances before he meets the 3000 people held here waiting for asylum process pic.twitter.com/Vy6o6PGAyn

Outside Camp Moria on Lesbos island, Greece where around 3,500 people are currently being detained – ahead of Pope Francis’ visit on Saturday.

Meanwhile, at the weekend, The Observer reported:

The purpose of the pontiff’s visit to the Aegean [on Saturday, April 16] is to see the migrant emergency up close, and the authorities are keen that no blinkers are involved. This time, the island on the frontline of the biggest movement of people in modern times intends to show it as it is.

“We won’t be changing anything,” says mayor Spyros Galinos when asked if municipal workers will at least be cleaning up the graffiti on the camp’s walls. “His visit has huge symbolism. It is what we have wanted, what we have seen in our sleep, what we have dreamed of for years.”