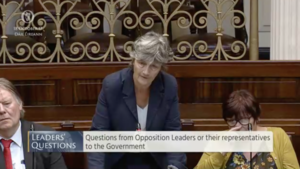 “The thinking behind the unit is very simple, one I hope most Members of the House will understand, namely, that if we do not measure, we cannot improve. If we want to improve something, we have to be able to measure it.”

Independent TD for Galway West Catherine Connolly asked Mr Varadkar if the Government will fund another Sexual Abuse and Violence in Ireland (SAVI) report – following on from the first, and only, such study in 2002.

Catherine Connolly: “Almost four months ago to the day, I used my time during Leaders’ Questions to raise the very serious issue of domestic violence. More specifically, I raised the failure of the Government to provide funding of approximately €1 million to review the groundbreaking study that was carried out in 2002, indicating over 3,000 victims of violence generally.

“This confirmed the extraordinary prevalence of violence in Irish society. Since then, the Taoiseach has presided over a budget that utterly failed and fails to grasp the seriousness of the issue or make any provision to deal with the extent of domestic violence and its pervasive and detrimental effect not only on women and children but also on society at every level.

“Simultaneously, the Taoiseach has provided €5 million for a strategic communications unit. He did so notwithstanding the urgent representations from SAFE Ireland, which represents over 30 organisations on the ground that are more than familiar with the catastrophe owing to violence generally, particularly domestic violence.

Leo Varadkar: “With regard to whether we will spend another €1 million commissioning another report, or another statistical or academic study, on domestic violence is a matter that will have to be considered by Ministers.

“Departments up to this date have said they are satisfied with the statistics and information they have. Rather than spending €1 million on another study or statistical report, they would prefer to spend it on other things, such as services or additional shelters and housing. It is, however, a matter on which I absolutely have an open mind.

“If the people within the Departments believe expenditure on an academic analysis or statistical report should be prioritised over alternatives, I will be happy to consider it.”

After getting documentation under the Freedom of Information Act, Ellen Coyne reported:

Plans for a study to establish the scale of sexual violence in Ireland have been scrapped by the government, The Times can reveal.

The move means that victims of rape and domestic abuse will not be counted unless they report their crime to the gardaí or are recorded by a charity.

Charlie Flanagan, the justice minister, has reneged on a commitment by Frances Fitzgerald, the tánaiste and his predecessor, to fund the study.

… The department had previously said that such data would be supplemented by the Savi report, but a source confirmed last night that those plans had been scrapped.

… Documents obtained by The Times under freedom of information laws show that Regina Doherty, the social protection minister, wrote to three cabinet colleagues in May pleading with them to fund the research. Katherine Zappone, the children and youth affairs minister, Frances Fitzgerald, then the justice minister, and Simon Harris, the health minister, all said they supported the study but could not afford it.”

The Rape Crisis Network Ireland has released a statement saying:

“The Rape Crisis Network of Ireland (RCNI) has announced today that it will not be publishing statistics on the experience of survivors of sexual violence relating to 2016.

“The decision was made on foot of significant cuts to RCNI’s funding, which have resulted in a diminution of the network’s capacity to safely analyse and publish data on sexual violence.

“Since 2005, RCNI has produced national statistics recording the collective experiences of up to 93% of survivors of sexual violence that use Rape Crisis Centres (RCCs) around the country.

“This powerful tool has been supporting survivors to becoming agents of change as they form part of an evidence base that has transformed policy and practice.”