Sinn Féin’s Martin McGuinness (second left)  with members of Justice For The Forgotten, a  campaign group seeking to find the truth behind The Dublin and Monaghan bombings of 17 May 1974.

According to credible allegations members of the British Army, MI5 and the RUC colluded with the Ulster Volunteer Force in planting the explosives.

The campaign is being highlighted during U2’s current world tour 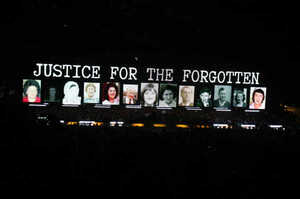 U2’s concert at the 3Arena included – during the song ‘Raised By Wolves‘ – a memorial to the victims of the Dublin-Monaghan bombings, an allegedly ‘false flag’ event involving the British Army and the Ulster Volunteer Force that killed 33 people.

The death toll was the greatest loss of life on a single day of the ‘Troubles’. No one has ever been charged with the bombings.