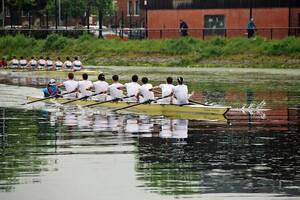 Next, novices are told to assemble in Botany Bay. In 2018, novices were militaristically lined up in the pouring rain, where they downed alcohol while more senior members of the club paced in front of them, bellowing in their faces and rattling the fences of the tennis courts with the canes and bamboo sticks.

This episode was witnessed by a resident of Botany Bay and a reporter from The University Times.

To demonstrate that they had finished their drink, the novices were told to place their can, upside-down, on their heads.

Botany Bay is also where the whipping with bamboo sticks often begins, according to several of the accounts. On multiple occasions, it has also been the starting point for a sprint, which sees novices – some told to strip to their underwear – run around Dublin city centre until they are told to stop and consume cans of beer.

The last person to finish their can of beer is told to drop and do press-ups.

According to one account, the whipping on the run was so severe in one year that it resulted in lasting bruises and welts.