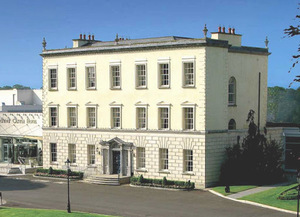 Dunboyne Castle Hotel is a hotel and spa in Co Meath but a section of the older part of the hotel used to be Ard Mhuire Mother and Baby Home.

On Saturday, RTÉ journalist Brian O’Connell accompanied several mothers, who had lived in the mother and baby home for a time, and who revisited the building at the weekend.

The visit had been organised by Irish First Mothers.

One of the mothers whom Mr O’Connell spoke to was Emer, who would have been one of the last mothers to enter the home, in 1989, when she was in her early 20s and had a baby boy.

She has since met her son.

She now lives in Scotland and returned to Ireland to give evidence to the Commission of Investigation into Mother and Baby Homes the day before she met with Mr O’Connell.

In an item broadcast on the Today with Sean O’Rourke Show earlier this morning, Emer told Mr O’Connell:

“Coming here is like having that feeling of having this dark cloud over you that’s going to take away your baby when it’s born.”

Speaking about meeting her son for the first time since she was in the home, she said:

About giving evidence to the Commission of Investigation into Mother and Baby Homes, she said:

“[It was] difficult but useful, to be able to actually tell your story. I would like people to understand how difficult it was for women and what they had to go through. I would like to get an apology for what was done to us.”

Previously: ‘They Exclude And Stall While We Die’