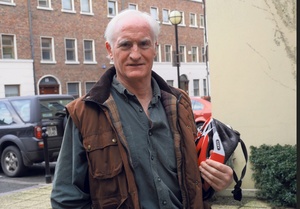 Shane Coleman: “You did criticise their coverage of it though?”

Stewart: “Because the climate change is a science that has been proven many years ago by the… by all the science community. There…there…it is unequivocal that climate change is real, is happening now and basically it is being caused by all of us humans in our greenhouse gas emissions in terms of fossil fuel. Now, that is science that is proven – it’s the same as, for example talking about tobacco smoke. We knew tobacco smoke, the science knew years ago that tobacco smoke was damaging health. Yet the deniers were allowed to keep…keeping the denial and confusion for years. Thereby, millions of people have died in that time because of tobacco smoke, you know – and basically….”

Coleman: “Okay, so when RTE are covering this issue, what in your view, what traps do they fall into, what’s the problem in how they are covering it?”

Stewart: “Well, it’s the same what every talk-show is doing, you know, every radio talk-show on every channel. First of all, everybody seems to avoid climate change – it’s not popular, it doesn’t bring in the ratings – it’s not good for advertising, and that’s a fundamental issue for all media, including the press. So, when I’m criticising RTE, I’m criticising it because they are the are the public state, public broadcaster – and I’m very conscious that we need to inform our public about the facts, and about the truth. And the truth is that we are facing a massive, the biggest issue ever faced by human beings – is climate change. And it’s happening now and it’s going to effect our children…”

Coleman: “The greatest challenge ever? I mean greater than World War Two and The Atomic Bomb?”

Stewart: “Absolutely, absolutely and it is going to have devastating effects – and this is what really concerns me Shane. The media don’t seem to get it. The media seem to not read the signs. The IPCC report is out there, it’s in…”

Coleman: “The IPCC being? Just explain who they are.”

Stewart: “The Inter-governmental Panel on Climate Change report, the fifth assessment – it’s out there for everybody in the media to become informed about. Look, we need to protect our children’s future. And we’re not acting…safe, properly on this. So, if I make, if I kind of get upset about RTE, it’s in the context of the wider picture here. Because there’s elections on at the moment Shane…”

Stewart: “How much time have I got?”

Coleman: “We’ve got plenty of time!”

Coleman: “NO, let me just ask a question…we’ve plenty of time.”

Stewart: “You tell me how much time I’ve got! Listen, do you want me to talk here?”

Stewart: “Then tell me how much time I’ve got – because I want to know, I’ve a lot to say here Shane.”

Stewart: “I don’t want to get bogged down here, by the way.”

Coleman: “We are getting bogged down here.”

Stewart: “Listen, listen, I could walk out of the studio here, this minute, if you wish? Would you want me to do that?”

Coleman: “Why would you do walk out of the studio, we’re having a discussion?”

Stewart: “Because, unless you tell me how much time I’ve got, I’ve got a lot to say here. Or do I have to go to another radio station and say it. You’ve asked me here today, you’ve asked me to come into this studio. Last night, a very good researcher asked me. She said I would be able to talk about the issues in the wider context because I’m very concerned – that I’d get the facts about issues across to the public. So please tell me how much time I’ve got.”

Stewart: “Listen, it’s not worth my time, I’m going to go to another station with this. There’s plenty of people who want to hear. I have an awful lot to say Shane.”

Coleman: “And we want to hear you…”

Coleman: “Well, let’s just talk instead of wasting time and…”

Stewart: “No, no – give me 10 minutes, or I’m not staying in this studio! Listen there are many…”

Stewart: “Nothing’s going to hold me back when I get to Europe – if I do go there, by the way.”

Coleman: “You have to be elected first?”

Coleman: “Is the Irish electorate…”

Coleman: “Getting elected is a simple matter?”

Coleman: “Do you think you’ll walk into the Parliament?”
Duncan Stewart: “No – but I know the people of Ireland are waiting for someone to give them …”

Coleman: “And that person is you?”

Stewart: “Well, I don’t know, but I do know I’m going to reach out there.” 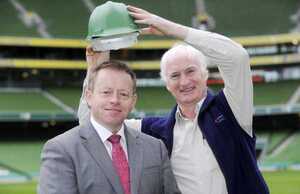 [From left: Minister of State for Training and Skills, Ciaran Cannon pictured with environmentalist and former RTE presenter Duncan Stewart in the Aviva Stadium in 2011]

Duncan Stewart went on Newstalk Breakfast this morning to talk to host Shane Coleman about the media’s coverage of climate change.

“I want to know, I’ve a lot to say here. I can walk out of this studio this minute if you wish, unless you tell me how much time I’ve got. Do I have to go to another radio station to say it?”

‘Give me ten minutes or I’m leaving’ – Duncan Stewart has meltdown on live radio (Independent.ie)

Listen back to full interview here