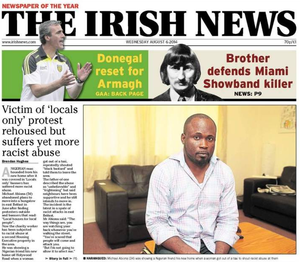 A Nigerian man hounded from his new home after it was covered in ‘Locals only’ banners has suffered more racial abuse. Michael Abiona (34) abandoned plans to move into a bungalow in East Belfast after finding protestors outside and banners that read ‘Local houses for local people’.

Now the charity worker has been subjected to racist abuse at a second Housing Executive property in the area. He was showing a Nigerian friend his new home on Holywood Road when a woman got out of a taxi and repeatedly shouted “black bastard” and told them to leave the area.

Mr Abiona said “The way things are, you are watching your back whenever you’re walking the street. You’re scared that people will come and attack you. But I’m not going to allow it affect me.” 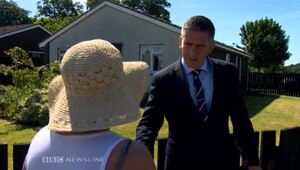 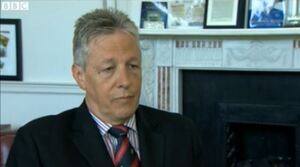 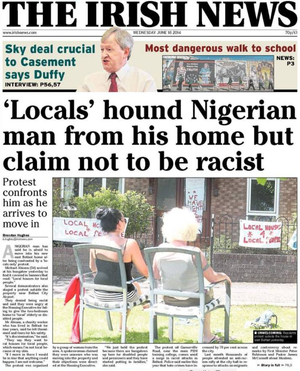 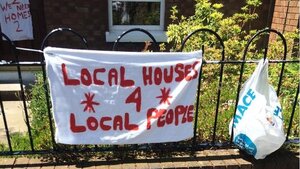 A man from Nigeria has said he is afraid to move into his new Belfast home after he arrived to find five people protesting on the doorstep.

Mr Abiona who has been living in Northern Ireland since 2010 said four women and a man were outside the house.

They asked how he had managed to get the house and whether he was disabled.

Now, he said, he will not move into the Housing Executive property at Knocknagoney because the mother of his son is frightened and will not allow their child to visit the house.

Mr Abiona said he had reported what happened to the police.

listen to ‘"I've got to think of safety of my son" – Nigerian man on the east Belfast protest that's left him afraid to move into his new home.’ on Audioboo 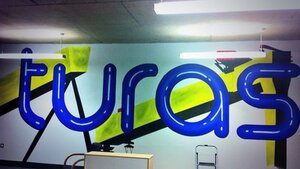 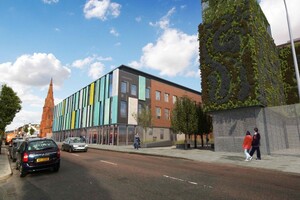 A new Irish language centre is to open later in east Belfast to cope with an increasing number of learners.

The Turas [Journey] centre, based in the Skainos building (above) on the Newtownards Road, houses a classroom, offices and a library/social area. Development officer Linda Ervine said a growing interest in the language had led to the need to expand.
Ms Ervine said a “taster” Irish class held three years ago had revealed a surprising level of interest in the language.”We started a regular class two years ago which was meant to last for 15 weeks,” she said.
“Now, around 90% of our learners are Protestants. “People contact me on a weekly, even daily basis. All we have done is to open the door.”

Previously: Teanga Up In Red, White And Blue 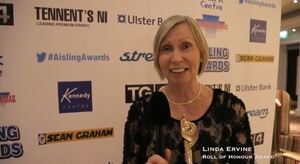 Linda, is a sister-in-law of the late PUP leader David Ervine, who himself learned Irish while in prison.

“What the language does is, it allows people to explore the idea of Irishness in a non-threatening way. We are Irish. I feel I’m Irish.”

She learned from the 1911 census that her husband’s relatives had lived in East Belfast and spoke both Irish and English. Yet their signatures were listed on the Ulster Covenant. Linda deduced that their knowledge of Irish wasn’t linked to their politics.