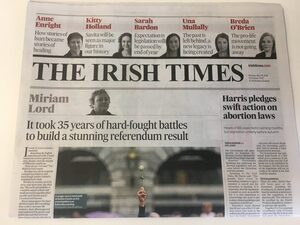 Next step is making this all-female masthead a normal occurrence in the @IrishTimes rather than something that only appears in exceptional circumstances https://t.co/EdMM0tVpNe

“Why are Irish journalists once again missing a movement? The media at large does appear strangely unable to interpret political movements when they are citizen-driven and formed outside the traditional party political structures.

“The example of how much coverage was given to Renua is an interesting incident of media gravitating towards, and giving credence to, a new political entity just because it was a political party, even though Renua was instantly irrelevant.

Contrast that with how slow the media was to treat with legitimacy the protest movements around water charges, homelessness, marriage equality, transgender issues, reproductive rights, third wave feminism, and so on. Yet it’s the latter that are actually effecting social change.

I have spoken many times about the Irish media’s tendency to be disconnected from the social change that happens from the ground up. I’m sure this point of view annoys many of my colleagues, especially considering journalists are meant to be the ones “in the know”.

“My personal (unpopular) analysis is that while journalists as individuals are made up of all political persuasions and points of view, there is an odd conservatism of thought that permeates the industry.

“…Of course, the maleness of this commentary cannot be ignored. The marriage equality campaign saw a largely heterosexual media comment and patronise an LGBT+ campaign. Now we are seeing a largely male political journalistic class comment on a female-driven campaign. Perhaps if there was greater diversity in the Irish media, we would be getting different analyses.”