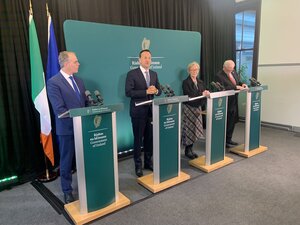 The Taoiseach has been unable to give an absolute guarantee that the Dáil will reconvene next Wednesday amid speculation that there could be a snap general election called next week.

Speaking after a Cabinet meeting in Marino in Dublin, Leo Varadkar said that he would have to speak to Fianna Fáil, Independents and other parties over the next few days.

He said the return of the Dáil was planned for Wednesday, before adding that this is case unless something changes.

Varadkar: No guarantee Dáil will resume next week amid election speculation (RTÉ)