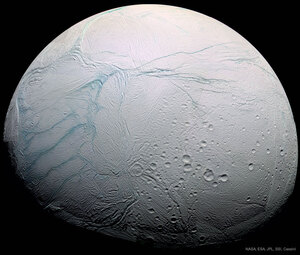 Behold: a high definition image of Enceladus – the sixth largest of Saturn’s moons – captured during a flyby by the Cassini spacecraft, which orbited the ringed gas giant from 2004 to 2017. Evidence of extraterrestrial life? To wit:

A reason to think that life may exist there are long features — dubbed ‘tiger stripes’ — that are known to be spewing ice from the moon’s icy interior into space. These surface cracks create clouds of fine ice particles over the moon’s South Pole and create Saturn‘s mysterious E-ring. (/) The unusual surface tiger stripes are shown in false-colour blue. Why Enceladus is active remains a mystery, as the neighbouring moon Mimas, approximately the same size, appears quite dead. A recent analysis of ejected ice grains has yielded evidence that complex organic molecules exist inside Enceladus. These large carbon-rich molecules bolster — but do not prove — that oceans under Enceladus’ surface could contain life. Another Solar System moon that might contain underground life is Europa. 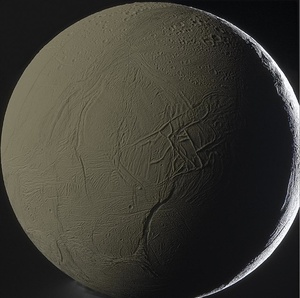 No, it’s an extreme close up of Saturn’s sixth largest moon Enceladus taken by NASA’s Cassini orbiter. Normally, the moon would appear bright white. Here, the 500km wide iceball is glamour-lit by sunlight reflected off Saturn, resulting in a healthy tan.

As most of the illumination comes from the image left, a labyrinth of ridges throws notable shadows just to the right of the image center, while the kilometer-deep canyon Labtayt Sulci is visible just below. The bright thin crescent on the far right is the only part of Enceladus directly lit by the Sun. The above image was taken last year by the robotic Cassini spacecraft during a close pass by by the enigmatic moon. Inspection of the lower part of this digitally sharpened image reveals plumes of ice crystals thought to originate in a below-surface sea.