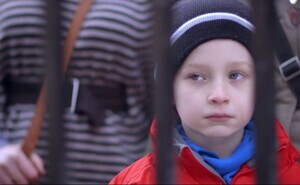 A still from Equate’s ‘Open The Gates’ video campaign

They can agree on nothing.

“I support the three actions [reform school admissions, where religion is taught in the school day and more multi and non-denominational schools]. My own children attend the Dublin 7 Educate Together, and I think having more such schools would better serve communities throughout the country that have families from diverse, multi-ethnic or non-denominational backgrounds.”

“Fianna Fáil commits to reform school admissions on the basis of locality to ensure children have access to their local school regardless of denomination while protecting religious rights. Ensure no child is excluded from school life while respecting the religious ethos of each school. Engage with educational partners to set out a consensual approach to roll out further divestment of schools in line with assessed community demand”.

“Fine Gael is fully supportive of moves towards a more pluralist system of patronage for our schools to provide greater parental choice and diversity in our school network.”

“It is Sinn Féin’s policy to end the laws that allow for religious discrimination against children in school admissions and we will support increased diversification of patronage. We are committed to increasing the education capital programme which will allow for more school builds and this will allow for diversification also of the types of schools being built.”

“We’ll ensure that publicly funded schools prioritise children from the local community, rather than focusing on their religion.”

“The Social Democrats have included a commitment to end this discrimination in our manifesto. Whether or not in Government, I will be pursuing this vigorously.”

“I believe that the church and state need to be separated and have campaigned for this for years both inside and outside the Dáil. Access to and participation in schools should have nothing to do with religion It is essential at this day and age that people do not feel under pressure to christen their children just to secure a school place, and we are therefore committed to keep on fighting for equal access to schools for all”

“I recently met with Equate and fully endorse their campaign for reform of our education system and to ensure greater equality in children’s education in Ireland. I hope to help the campaign further and I agree with your points that reform is needed in schools’ admissions policies so that they no longer discriminate due to religion; that the school day change so no school child is excluded from fully participating due to their religion or non-religion, and that we need to increase the number of multi and non-denominational schools available.”