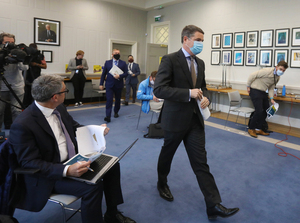 Minister for Finance Pascahal Donohoe and Minister for Public Expenditure and Reform, Michael McGrath following behind

Latest exchequer figures reveal the year-on-year decline in the overall tax take to be just just 3% so far this year.

The Department of Finance had forecast in April that State revenues would fall by 16% this year due to the pandemic disruption.

But a strong pre-crisis start to the year, better than expected income tax take since and a surge in corporate tax receipts meant revenues were little changed in the first six months.

An unprecedented level of stimulus to soften the economic hit pushed Government spending up 24.9% year-on-year in the first nine months and the Exchequer deficit to €9.4 billion, today’s figures show

“They show that although receipts are better than previously expected, much of the over-performance relates to corporation taxes – a revenue stream we cannot rely on over the medium-term.” 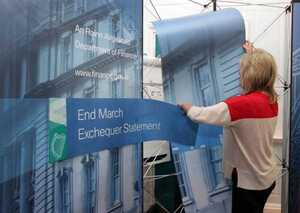