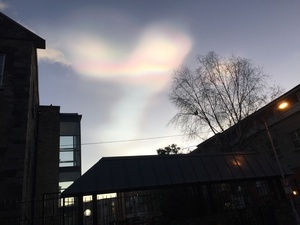 Dubliners have been treated to an amazing sight the last two mornings: rainbow clouds, just before dawn. Their delicate beauty captures the imagination, but how do they form?

Clouds are made up of tiny droplets of water, or in the winter, ice. So clouds can spread sunlight into different colours, the same way you’d see different colours in a rainbow, when light passes through water droplets in the air. This happens due to an optical process called diffraction: when light passes from air into a medium like water, it bends because the properties of water are different than the properties of air for an electromagnetic wave-like light which is passing through.

Different colours of light bend different amounts, giving us the splaying of colours as if from a prism…

Polar stratospheric clouds occur in the far north and south of the globe, where ice crystals in clouds are common, and are also called ‘nacreous clouds’ for their resemblance to mother-of-pearl… Another even rarer winter sky phenomenon to keep an eye out for is ‘sun dogs’. Diffraction in ice crystals in clouds can bend the light from the sun so much that it appears to be in multiple places at once!

Yesterday: Is This Normal?