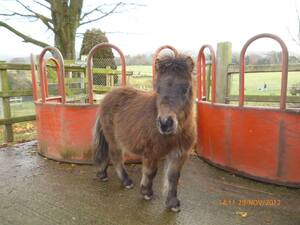 This is Peanut. He came into the DSPCA last Friday. He was rescued by a fantastic member of the public who found him in Ballyfermot [Dublin]. Some young people were being cruel to him and had tied a rope around his lower jaw with a wooden pallet attached to the other end. They were chasing him around the green.
The kind gent offered to buy the pony and then paid a passing van to bring him back to his home in Tallaght where he phoned the DSPCA. Peanut is about 4 year old and is a Falabella (one of the smallest breeds of horse in the world). He has no major injuries after his ordeal and will be looking for a new home in the coming weeks. The DSPCA has a number of horses and ponies looking for good homes at the moment. If you are interested please contact us below.