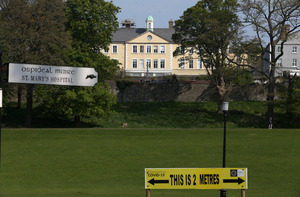 St Mary’s Hospital in Phoenix Park, Dublin where 11 residents have died, ten of whom who tested positive for Covid-19 and one who is suspected to have had it

They were discussing Covid-19-related deaths in Irish nursing homes, of which there have been 253 to date, when some of the panelists had this exchange.

[There have been 486 Covid-19-related deaths recorded to date]

Seán O’Rourke: “Brenda Power, do you agree with the suggestion that the authorities where, the nursing homes were considered certainly, may have taken their eye off the ball? Just because they were concentrating on the acute hospitals?”

Brenda Power: “Although, you know, for a start, I do know from friends who have parents and so on in nursing homes, they did, a lot of them did take action quite early on before there was any obligation on them to do so, to restrict visiting and so on. So, I do think it’s unfair to blame the staff or to point the finger in any way at the staff of the nursing homes.

“I was talking to a GP friend of mine, asking, you know, how come the attrition rate is so high. Well, first of all, you’re talking about a very vulnerable cohort which, of course, you could say, well it should have been foreseen.

“But, also, you know, they fall, they get sick, they break hips, they have to go into the general hospitals and they were bringing back the virus with them before anybody knew how widespread it was. So, you know, yes, of course, we’re playing catch-up. But, god Seán, in so many areas, in regard to this, this, these unprecedented times, we’re doing the best we can. We really are.

“And I mean I wonder if, I do wonder if whether the numbers, losing their lives in the nursing homes, is in particularly stark contrast to the relatively small numbers dying in the communities, compared to say the UK, Wales and Scotland included. You know, I think it may look an awful lot worse. And, plus, I think we’re being more honest about them to be honest.

“Because I think it’s emerging that the numbers in the North, for instance, that they’re not releasing the correct numbers or there might be a bit of massaging of figures of the people dying in nursing homes going on.”

O’Rourke: “Brenda Power, the other thing is that we’ve seen the coroners say that they need to maybe be a bit more rigorous in identifying Covid-related deaths to that, as opposed to maybe having, putting on the [death] certs respiratory issues or whatever.”

Power: “Yeah, well, I mean, again, I’d be reluctant to categorise that as any attempt at fudge or cover-up. I believe they have up to three months, for a start, to certify a cause of death.

“And, secondly, I would say it’s probably the case that people are dying with Covid-19, in some cases, and maybe not necessarily of it. So it may be, it may be a case of semantics in some instances.

“Again, I’m reluctant to go down the line of assuming that there’s any attempt to… fudge…”

O’Rourke: “No, no, that’s not being suggested. But there maybe needs to be a bit of rigour, the way, about the way this thing is being approached. What would you say to that, Mick Clifford?”

Michael Clifford: “Yeah, I suppose there could be, Seán. But I would tend to agree with that, that you know, you are dealing with a scenario whereby an awful lot of these people have underlying conditions, unfortunately.

“And the reality is that, unfortunately, is that life expectancy for a number of them would not be great. And therefore, along comes this, and in some instances, it’s not recorded specifically like this.

“I mean, I don’t think there’s an underhand attempt to cover it up or anything but you are dealing with a pretty chaotic situation as we can see. Particularly, we’ve seen a couple of [nursing] homes in Dublin and Portlaoise, for instance, where you’ve large numbers of people losing their lives. And I can understand why, in that scenario, there could be some shortcomings in that regard.”

Power: “…before we terrorise people, you know, let’s remember that 70 per cent of nursing homes have no virus, they’re free of the virus. I know it’s desperately worrying for the people in the 30 per cent bracket but that’s still quite an impressive statistic in the circumstances.”

Previously: The Reporting Of Deaths