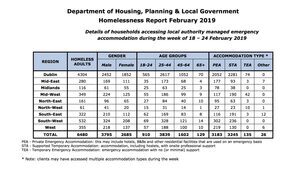 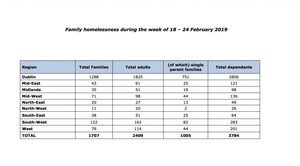 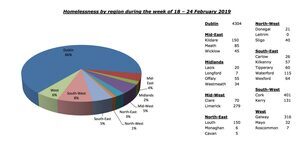 The Department of Housing released its latest homeless figures showing that a record 10,264 people – 6,480 adults and 3,784 children – were living in emergency accommodation in the last full week of February 2019.

Asked about categories who are not included in homeless figures Housing Minister @MurphyEoghan says he doesn’t think a family in hotel is the same as someone who has moved back in with their parents.

Minister for Housing Eoghan Murphy has said the increase in homeless numbers is very disappointing and a number of people are at “the very blunt end of the housing difficulties”.

He said the root of the problem lay in the need to build and create new homes.

Speaking on RTÉ’s Morning Ireland, the minister said more homes were built last year than any previous year in a decade, and approximately 1,700 new homes were created in Dublin last year.

But, he said, it was taking more time than he would like to build new homes.