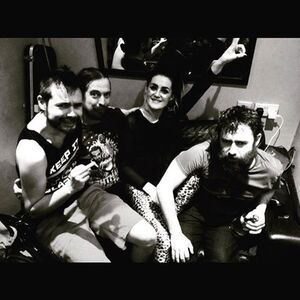 02. The band last year released their self-titled third album, a slightly calmer affair than its slightly overcaffeinated predecessors, Fight Like Apes and the Mystery of the Golden Medallion, and The Body of Christ & The Legs of Tina Turner, bearing an energy for which the band became infamous live.

03. Streaming above is the video for Crouching Bees, the lead-off single from the aforementioned eponymous long-player. Not to pick favourites, but it’d be silly to just horse Jake Summers into their eulogy.

04. The band’s farewell statement included the announcement of their final gigs. Write the band:

Stick a fork in us, we’re done.

We’ve been quiet for a while now. We’ve had a lot of thinking and talking to do.
We’d be here all year if we started listing the people we wanted to thank, so we’ll just do that in our own time.

You’ll see us all again under different musical guises but, these 3 shows will be Fight Like Apes’ last. We want to call it a day while we’re all still pals and are proud of what we’ve done.

And we are very, very proud.

It’s a deadly time in so many ways to be in a band; you can have so much control over your work if you’re clever; you can release it how and when you like and in our opinion, right now, Ireland is the healthiest it’s ever been in terms of talent and diversity.

But, there are massive challenges for a lot of bands, mostly financial, that make this a tough job and sadly, those obstacles have become too big for us.

I think we all know that we’re going to hear announcements like this more often. A lot of people don’t seem to understand that we can’t keep producing records if you keep not paying for them. Bands are having to sell beautiful albums for €2.99, labels can’t give you as much support since they’re losing income too and our alternative radio stations* are practically non existent now, meaning so many wonderful bands will not get a chance to get played on radio as they’ll be competing with huge pop acts.

Please buy your music in independent record stores or directly from the band.

Don’t fool yourself in to thinking that your £10 subscription to Deezer and Spotify helps us at all. It does not. Look how many bands are on there and do the maths.

Thanks to all you entirely crazy, wonderful people who have supported us and danced and screamed with us over the past 10 years. We could never thank you enough.

I still can’t believe some of the amazing things we’ve done together and how far we came.

If you want to come see us here’s how:

December 9th – back to where we had a our very first gig 10 years ago – Whelans, Dublin.

*RIP TXFM. We absolutely adore you and everything you’ve done for music in Ireland.

VERDICT: Another veteran act calls it a day in a time of transition for an active Irish music scene. They’ll be sadly missed, but this upcoming tour ought to be the New Orleans funeral that Fight Like Apes deserves.