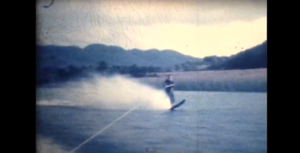 Water-skiing footage shot in the early Seventies in Sligo.

With music by Tom Rosenthal.

Fionn MacArthur, whose father and uncle shot the footage, writes:

I find watching the footage nostalgic in a way. Especially seeing as I’ve grown up just right around the corner from my dad’s house where the footage had been filmed. I guess the fact that we’ve water skied right past the front door every summer (and still do) would have had an impact. I plan to shoot a short mini documentary on this topic within the near future. It will be great being able to implement the old super 8 footage with recent up-to-date shots.