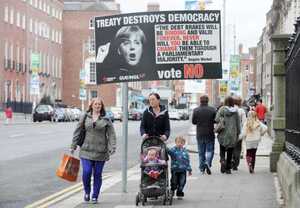 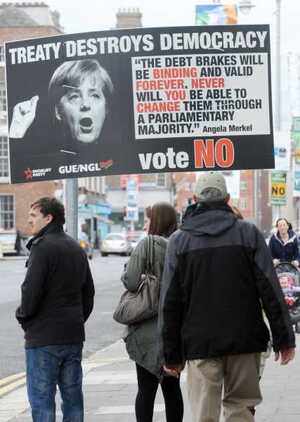 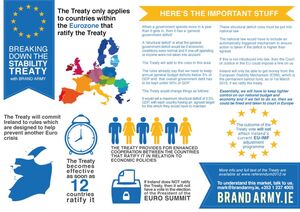 A potted guide to the fiscal compact thing.

Thanks Mark Breen at BrandArmy.ie

The Minister for Jobs, Richard Bruton, has just retracted his statement on a second referendum. #euref 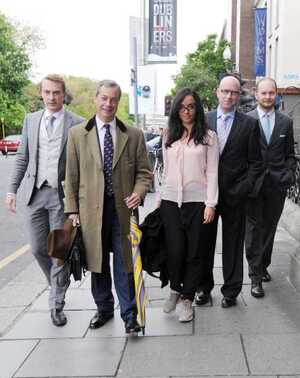 Yesterday: The dandified far-right ‘Europe for Freedom and Democracy’ group in Dublin. 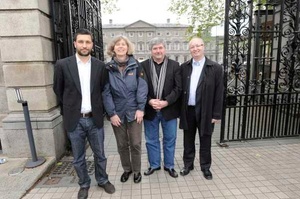 Divided by taste. United against teh treaty. 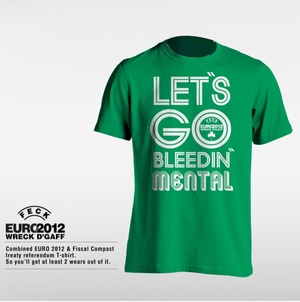 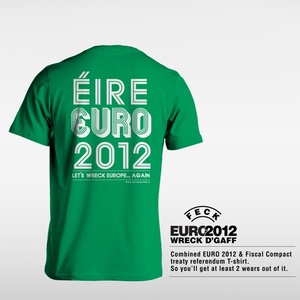 Yours for €15. Available here 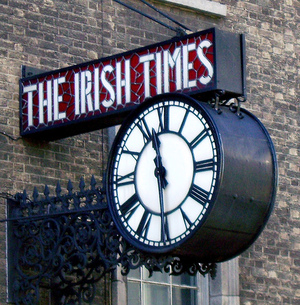 The Irish Times nails its ‘all business, all week’ colours to the mast this morning.

In Ireland, the issue at stake is not leaving the euro, but there is a similar simplistic refusal among some No campaigners to acknowledge that the alternative to what they call the “austerity treaty” is also austerity.
And almost certainly austerity with spades. Some argue that our EU partners will surely see us right even if we vote No – a bit rich from those who have long decried the supposed malign influence that Berlin and Paris represent. Or that money forgone from a possible second bailout by the European Stability Mechanism (ESM) will be found elsewhere easily, notably by bleeding the rich. It is naïve, wishful thinking and an irresponsible feeding of fanciful narratives to a hurt people that desperately wants to believe comfortable truths. The left owes its constituency better, the truth.

A genuine dialogue on the treaty’s merits is also not helped by the wilful distortion of language that use of terms like “blackmail clause” represents.

…To that end we have come together with partners voluntarily to create the necessary structures for our common project. And, to enjoy the potential benefits of such a robust currency, not least the possibility of using its weight in the markets to create relatively cheap credit, we all agree to play our part. 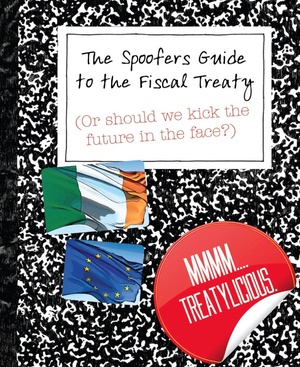 A partisan guide to why you should vote yes by Jason O’Mahoney and Andrea Pappin.

How annoying is that missing apostrophe? 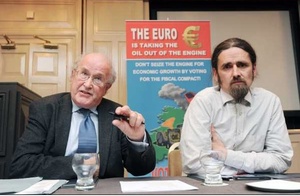 Director of The National Platform EU Research and Information Centre, Anthony Coughlan and Luke ‘Ming’ Flanagan in Buswell’s Hotel this afternoon launching the ‘Farmers for No’ campaign, which is composed of past and present Officers of both the Irish Farmers Association (IFA) and the Irish Cattle and Sheepfarmers Association. 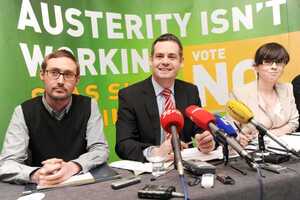 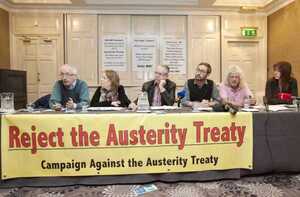 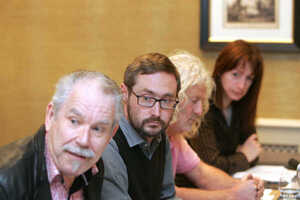 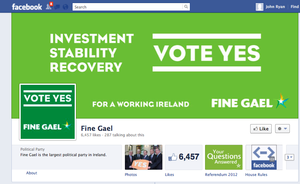 Regardless of your politics I think this deserves to be highlighted. The official Facebook page of Fine Gael is censoring genuine, concerned questions on the Fiscal Compact/ Stability treaty  – look at the eco fin thread and check others for examples. These comments did not have and insults/threats or foul language, they were deleted for having a different point of view or asking questions that are hard to answer. We should not let a political party get away with censoring voters genuine concerns on their Facebook page simply because it is inconvenient. For the record I was not one to have my comment censored.