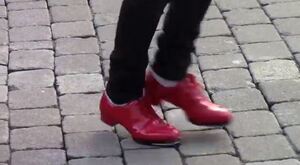 “Here is a video my friend put together from a sean-nós dancing flashmob that we organised in Galway to launch the annual Oireachtas festival that will take place in Killarney from the 29th October – 3rd November. The festival celebrates the best of Irish music, sean-nós singing, dancing and storytelling and one of the highlights is the ‘Steip’ sean-nós dancing competition which will be broadcast live on TG4 on Saturday 2nd November at 2pm.”

“The Oireachtas is one of Ireland’s longest running festivals having been established in 1897 and will attract crowds of up to 10,000 to the Kerry town over the six days. Other highlights include the Corn Uí Riada sean-nós singing competition which is held in memory of Sean Ó Riada, the Cabaret Craiceáilte which will feature music from Kíla, Bréag and Mo Hat Mo Gheansaí and the nightly Club na Féile which will gather hundreds to the dance floor for the night/morning.”

Today was the last day of National Choral Singing Week and the RTE Big Music Week. Naturally, they went out with a song.

Earlier this afternoon, shoppers were treated to a rendition of Handel’s Hallelujah Chorus by a coordinated flashmob on various levels of the centre. 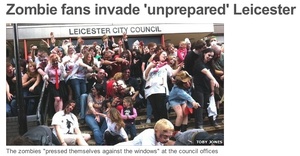 150 people took part in a half-mile ‘mass shamble’ through the streets of Leicester, culminating in a mass ‘window press ‘n’ groan’ at the offices of the City Council.

It followed news last week that a “concerned citizen” had used a Freedom of Information request to ask how the authority would tackle a zombie attack.

The inquiry stated: “Having watched several films it is clear that preparation for such an event is poor and one that councils throughout the kingdom must prepare for.”

Leicester City Council conceded it had no specific emergency plans in place, but said the request had “made them laugh”. 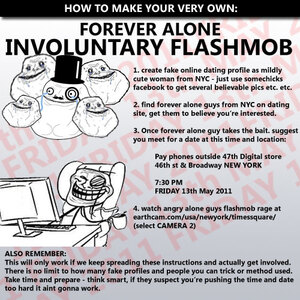 The wild internet message board 4chan, known for originating almost all memes and spawning the hacker/activist collective Anonymous, is plotting a prank on some unfortunately lonely fellows using OkCupid. The point, if you could call it that, is to create an flashmob, in which a large group of people flashily take over a public space, but involuntarily by making a bunch of fake online dating profiles and agreeing to meet men at a specified moment in Times Square.

By May 13th, any FA who hasn’t already heard about this probably deserves their moment of horrible fame.

Come the day, trolls everywhere will be glued to camera 2.