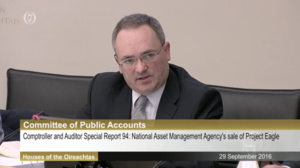 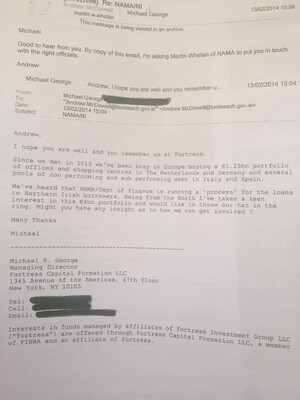 US investment fund Fortress was the only underbidder in Nama’s eventual sale of Northern Ireland loan portfolio, otherwise known as Project Eagle, to Cerberus.

You mayrecall the following sequence of events, as outlined in the Comptroller and Auditor General’s report on the sale:

On January 8, 2014, Lazard and Company Ltd were appointed as the loan sale advisor for Project Eagle.

On February 13, 2014, it was reported in the press that Pimco had approached Nama, back in 2013, to buy the whole Northern Ireland portfolio and, a day later, selected bidders were allowed to access information on the loans in a data room.

On April 3, 2014, Nama approved the sale of Project Eagle to Cerberus who also used the services of Brown Rudnick and Tughans solicitors.

You may also recall reports that Fortresss had to make a representation to the Department of the Taoiseach on February 13, 2014, before it was invited into the bidding process some five weeks after it had begun and Nama’s denial of the same.

Noel Rock: “When were Pimco initially informed there was going to be a sales competition?”

Brendan McDonagh: “Pimco were told, I think, post the board meeting in January 2014. We’ve always maintained to Pimco, that there was never going to be an exclusive off-market sale directly to them.”

Rock: “Okay. All right. Do we have the minutes for that board meeting?”

Rock: “And it says that in it? Okay. Fortress, it was said earlier on, I don’t know if it was yourself of Frank said it, that there was no email to Enda Kenny from Fortress seeking…”

McDonagh: “None. No. There was reporting effectively that Fortress had, it was reported in the media that Fortress had to email the Department of the Taoiseach, the official Department of the Taoiseach to get access to the thing. That’s actually completely untrue. I know the managing director, senior managing director of Fortress. I met him a number of times I think in 2009 and we stayed in touch over various things. He emailed me on the 13th of February 2014. My email is available to the, there’s nothing in it. Basically saying, ‘Brendan, how’s it going?’ Talked about the rugby match at the weekend and said, ‘I just heard through one of my colleagues that the Northern Ireland portfolio may be on the market, it’s something I’d be interested in’. I forwarded the email to my colleague and said, ‘please let this guy, get Lazards to contact him because, you know, I met this guy, and I had no issue with him. I would know Fortress in my previous life. And it was, Fortress were brought, they were contacted by Lazards, I think that evening on the 13th of February. They were sent an NDA,  an non-disclosure agreement and they were sent the NDA on the 14th of February and then they didn’t return their signed NDA, because you can’t get access to the data room until you supply the NDA, they didn’t return their signed NDA until the 26th of February, I don’t know why it took them 12 days to sign it. Maybe they had to go through their own internal compliance or whatever it was but they were invited into the process, on the evening of the 13th of February, but certainly on the 14th of February when they were sent the NDA.”

Rock: “I’m familiar with your emails. I’ve seen a copy of those. On the same day though, they did email the Department of the Taoiseach. Why do you think they would have done?”

McDonagh: “There was no, I don’t know what email the Department of the Taoiseach, I haven’t actually personally seen that email…”

Rock: “I’ll forward it to the secretary so you can be provided with a copy.”

McDonagh: “But I saw the media report but I was a bit surprised by that because I had got an email from the senior managing director of Fortress on the 13th of February myself and I arranged for Lazards to get in contact.”

Rock: “Okay, all right. Thank you. In, I think it was yourself Brendan, in a previous appearance before the PAC, I’m just going to quote this here if you don’t mind: ‘We appointed Lazard, then Lazard approached the nine biggest funds in the world, the guys who would have fire power and capital to be able to buy a portfolio like this. Then you listed the nine firms, including Fortress that you said had been approached. But it obviously seems, based on the discussion of the email with the Department of Taoiseach and indeed to yourself, that it wasn’t the case that they were approached; they, in fact, had to approach you. Do you accept this quote is now inaccurate, in effect?”

McDonagh: “No, I don’t think so. I don’t think that’s inaccurate, deputy, because Fortress were one of the people which were considered to be approached by Lazard anyway so, as I said, there’s a league table in terms of, you know, people, division one, division two, division three, so as people drop out, we were pushing Lazard to get more people into the process.”

Rock: “Right. So. So, like, I’m finding this hard to understand. Did Lazard approach Fortress? Or not? If so, why did they [Fortress] need to approach you?”

McDonagh: “Well, all I can say to you, deputy, is as follows: On the 13th of February, I got an email from the senior managing director of Fortress, I got one of my colleagues to contact Lazard to say, ‘contact these guys in Fortress, find out if they’re interested or interested or not’. I don’t know personally when Lazard were going to contact Fortress or not, but I do know what happened on the 13th and 14th of February.”