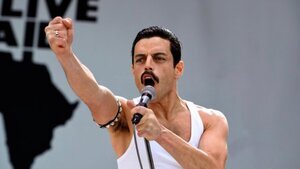 Or not gay enough?

Queen’s musical journey and the worldwide conquest are now slaves to a heteronormative vision that has been made fit, retroactively, to the lifestyles and sensibilities of the other three members of Queen.

Early on it becomes a “confession” film, following a model the French philosopher Michel Foucault recognised as participating in the creation of “an abusive guilt, something alienating and offering control over the confessed by a normative culture”.

In the movie Freddie Mercury almost appears as someone asking for forgiveness for being what he is. Like the real singer, screen Freddie also desires men but, in doing so, he “sins”.

He does not understand, as a sequence in the film shows, that another member of the band (Taylor) does not have enough time for carousing because he has a family, a woman and children for whom he feels responsible.

Screen Freddie lived out a sexuality that his time still considered mostly as deviant. This homosexuality, in the movie, leads him to make wrong choices, to damn his soul and come under evil influences.

By moving away from his “mother house,” portrayed here as a self-inflicted exile or banishment, the film shows an impressionable, almost weak-kneed Freddie Mercury sinking into the gay underworld of London, New York or Munich, eventually contracting an unknown virus – a stigmatising “gay cancer” – that will eventually kill him, as it killed over 30 million people since 1981…

The soundtrack’s not bad though.