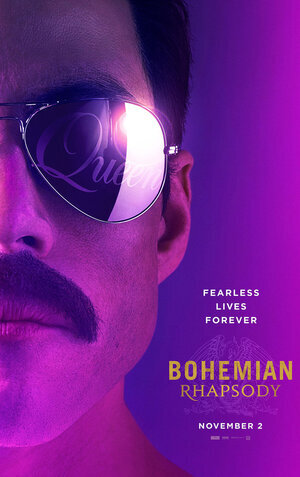 1. Almost 50 years after they first formed, and 27 years after the death of Freddie Mercury in 1991, “They” have gotten around to creating a biopic of the band that everybody loves to love, Queen.

“The film traces the meteoric rise of the band through their iconic songs and revolutionary sound, their near-implosion as Mercury’s lifestyle spirals out of control, and their triumphant reunion on the eve of Live Aid, where Mercury, facing a life-threatening illness, leads the band in one of the greatest performances in the history of rock music.”

3. The film has been in development for several years, with multiple changes on both sides of the camera. Sacha Baron-Cohen was attached to star and produce back in 2011; inspired casting for sure, but he eventually left (amicably, according to Deadline) during pre-production. It seems Cohen wanted to produce a gritty and dramatic “tell-all” about Mercury’s life, while remaining members of Queen Brian May and Roger Taylor were keen on a more family-friendly affair – as we can see from the finished product.

4. Meanwhile, David Fincher was touted as director in those early days, but the gig eventually went to Bryan Singer. After on-set tension between Singer and Malik, however, Singer was fired from production mid-filming, and is subsequently unmentioned in any of the film’s official literature. Yikes.

5. Bryan Singer was replaced by – of all people – Dexter Fletcher, director of the musical Sunshine On Leith (2013) and last year’s Eddie the Eagle. Also people may remember him from pretentious late-80s CBBC teen drama Press Gang.

6. There’s the ubiquitous Aidan Gillen, playing one of the band’s managers over the years. Also representing the parish is Downton Abbey’s Allen Leech.

7. Looks like all the musical biopic clichés are present and correct here. That said, Mercury was (and still is) a fascinating figure, and without doubt one of the most influential rock stars who ever lived. Despite some questionable licensing decisions, May and Taylor should be commended for the work they’ve done to keep his legacy alive all this time.

8. Plus, there’s the fact that a biopic is in many ways a fairground ride through a band’s greatest hits. For that reason alone, this is certain to get a lot of attention when it’s released later this year.

Verdict: A night at the cinema (insert your own Queen pun here if you wish; there are a zillion)