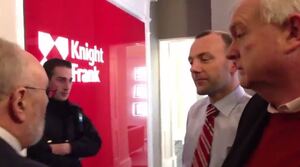 Yesterday afternoon a group of people from Friends of Banking Ireland went to the Knight Frank’s auctioneers office on Pembroke Street in Dublin, requesting that Knight Frank refrain from selling family homes or family farms that are the subject of litigation or are being sold without the consent of owners. They were later joined by Senator David Norris.

James Beades, of the group, said: