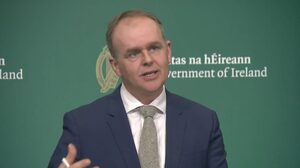 The Minister for Education Joe McHugh announced that Leaving Cert students studying languages will receive full marks for the oral section of exams that were due to be held in Irish and modern European languages.

The oral exams were due to begin on March 23 but have now been cancelled.

Journalist Richard Chambers, of Virgin Media News, asked Mr McHugh, in light of the move, if students will still be able to change their exam level, lending to gaining more points, and he said no, explaining:

“To be very clear, we’re going to get rid of all that excitement around that. That won’t happen because you’re correct in saying, on the morning of the exam, people can make the change. Normally I think it’s about 10% go from higher to lower and there is a small cohort that go from ordinary level to higher level, but the people made the decision.

Watch the press conference back in full here

Earlier: He Brought You The Gathering