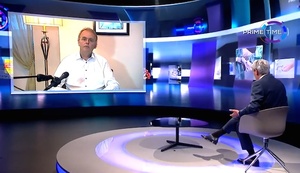 Minister for Education and Skills Joe McHugh discusses the difficulties the two metre social distancing guidelines are having on the education system#RTEPT | #COVID19 | @mcculld | @McHughJoeTD pic.twitter.com/WFIL8cTx9H

….Yesterday morning the Minister for Education was on the airwaves. He told Sarah McInerny that schools weren’t going to reopen properly come September. We’d still be doing the online learning a few days a week, with a few other days with the children in school.

For decades the Education has steadfastly insisted on behaving as though every home still had a stay at home mother to look after children at any given time.

But proposing to put that presumption into action, by forcing parents trying to return to work to give that work up for some, unspecified number of days a week, yet to be determined did not go down well.

The Minister for Education has said he would not accept a “half return” to school which would be required if the current two-metre social distancing guidelines remain in place in September.

At the start of the covid discussions, a lifetime ago in March 2020, there was talk of the idea of ‘lockdown fatigue’ where the public just would refuse to comply.

Homeschooling a 9 year old, while also trying to educate a 6 year old, while trying to work a full time job all at the same table seems like a circumstance designed to test the limits of that fatigue to the maximum.

We may yet see the Department of Education’s certainty on what can and cannot go ahead in September is as unreal as the Leaving Cert that never was.

Minister for Education Joe McHugh explains ‘his’ decision to cancel the leaving Cert.

There will be four layers to the calculated grades system:

1) An estimation of scores and rankings by a student’s teacher. The teacher will estimate a percentage mark for each student, and also their ranking compared to classmates. This will happen for each individual subject.

2) This will then be subjected to an in-school alignment process, in which subject teachers will work together to finalise their estimated marks and rankings.

3) The school principal will review and sign off on marks, and may return estimated ranking or marks to teachers for further consideration. 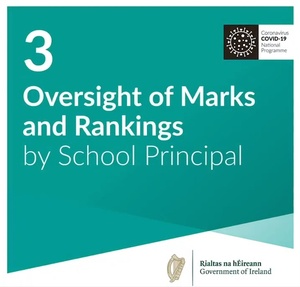 Leaving Cert exams will not go ahead this summer (RTÉ)

The Minister for Education Joe McHugh announced that Leaving Cert students studying languages will receive full marks for the oral section of exams that were due to be held in Irish and modern European languages.

The oral exams were due to begin on March 23 but have now been cancelled.

Journalist Richard Chambers, of Virgin Media News, asked Mr McHugh, in light of the move, if students will still be able to change their exam level, lending to gaining more points, and he said no, explaining:

“To be very clear, we’re going to get rid of all that excitement around that. That won’t happen because you’re correct in saying, on the morning of the exam, people can make the change. Normally I think it’s about 10% go from higher to lower and there is a small cohort that go from ordinary level to higher level, but the people made the decision.

Watch the press conference back in full here

Earlier: He Brought You The Gathering

The Seanad voted to pass draft legislation which would see the Education Act amended to ensure that schools teach children about Travellers.

Independent senator Colette Kelleher produced the Traveller Culture and History in Education Bill and yesterday, in the Seanad, the bill went through to the Dáil for further debate.

Ms Kelleher voiced her opposition to four amendments proposed by Fine Gael Minister for Education Joe McHugh but she did not seek a vote on them.

Mr McHugh told the Seanad it would be legally problematic for the Bill to specify that Traveller culture and history would be part of the curriculum.

“If section 30 of the Education Act 1998 was amended as proposed by lines 13 to 19 of the Private Member’s Bill, according to legal advice received by my Department, a situation would be created whereby the only subject area prescribed in this jurisdiction would be Traveller culture and history, granting it a different status from all other subjects, including Irish, English and maths.

“The curriculum in our schools is determined and set through an extensive development and consultative process conducted by the National Council for Curriculum and Assessment, which results in the production of syllabuses or specifications for each subject area.

“These are accompanied by circular letters issued to schools by my Department. I have proposed…to ensure that the Bill can be amended in a manner which would reflect the overall intent to include Traveller history and culture within the education system while not specifically prescribing the curricular content by means of legislation.”

Ms Kelleher said she was “disappointed” by Mr McHugh’s amendments.

She also said she fears Mr McHugh’s amendments may lead to the “promotion” of Traveller culture and history, as opposed to the “teaching” of the same and that this may lead to situations where some schools satisfy an “obligation to promote Traveller culture and history… with even the most minimal activity on the part of each individual school, if at all”.

“I feel we have the basis for further conversation. We can do more work when this Bill goes to the Dáil.

“Many Travellers have lost six, seven and eight family members to suicide. They are resilient people who stay strong in the face of this adversity.

“We are told that education is the hope to break the cycle of racism, prejudice and discrimination, that through knowledge and learning by us all, we will know better and this means we can almost certainly do better.

“Today, the Minister, Deputy McHugh, has the opportunity to reflect on what he has heard in this House and to, perhaps, change his mind.”

Prior to the passing of the Bill, Ms Kelleher said:

“A key purpose of the Bill is to dispel myths and lies at the heart of prejudice, racism and discrimination, which is an everyday experience for Travellers in Ireland.

“These myths have caused the perpetration of a cycle of victim blaming as described by psychologist, William Ryan, where members of the dominant community see features of the social life of a marginalised community that are the result of poverty and marginalisation as essential features of that community’s culture and use this observation to justify attitudes that cause this cycle of poverty, exclusion and marginalisation to be perpetuated.

“As a people we are ignorant of Traveller history and culture.

“Such ignorance is the context in which discrimination is a daily reality for the Traveller community.

“According to research by Michael McGrail of NUI Maynooth in 2010, 60.1% of settled people would not welcome a Traveller as a member of the family, 63.7% reject Travellers based on their way of life, and 18% would deny Irish citizenship to Travellers.

“Travellers and Traveller children and their life chances are the collateral damage of that ignorance and that denial. The Travellers’ story is part of Ireland’s story. We must be taught Traveller history and culture.

“I have completed my first year in a master’s degree in family psychotherapy. One of the first things we learn is the importance of knowing ourselves and our history.

“We do a genogram on which we try to populate our family trees, investigating and filling in all the blanks going back generations so that we may know ourselves and, to paraphrase the black civil rights activist and writer James Baldwin, that we may be able to claim our birthright.

“Traveller culture and history is a great, big blank in Ireland’s genogram.

“I ask all present what they know of Traveller history? Were any of us taught it?

“This omission is a dangerous airbrushing of Ireland’s only recognised ethnic minority from its rightful place in history.

“We are not just denying our identity; we are excluding a whole community.

“This gaping hole in our knowledge has resulted in poor policymaking. Travellers still speak of, and bear the scars of, the 1962 itinerancy report.

“There are also other examples.

“The Department of Education and Skills and the NCCA’s intercultural guidelines of 2005 are positive but were also ignored.

“The Department’s approach of seeking, rather than providing for, the inclusion of Traveller culture and history in the curriculum taught by recognised schools in the State simply has not worked.

“A Traveller child may be the only Traveller in the class and can be treated negatively and suspiciously.

“Oein De Bhairduin spoke about this Bill being an opportunity to lift the responsibility for Traveller culture in education from the shoulders of that little child to us as the State.

“Is it any surprise that, compared to the general population, Travellers are more than 50 times more likely to leave school without the Leaving Certificate?

“Just 13% of female Travellers were educated to upper secondary level or above when compared with almost 70% of the general population.

“At most, 57% of male Travellers were educated to primary level. The CSO national Traveller education statistics from 2016 estimated that only 167 Travellers ever went on to third level education.

“There is a history of legislation failing to protect the Traveller community. The Bill in its current form seeks to change that. Traveller culture and history in education needs to be mandatory.

“Well meaning, well intentioned, aspirational guidelines and directions to schools, done with undoubted goodwill but without the force of law, simply do not deliver to all Travellers the teaching of Traveller culture and history.