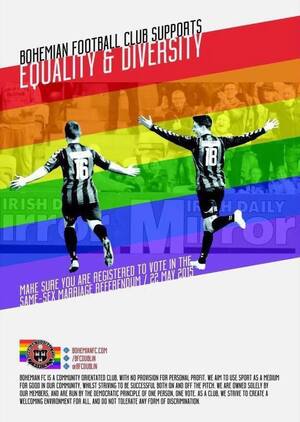 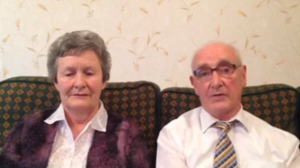 Paddy: “And I’m Paddy. We are voting for equal marriage, we hope you will vote with us.”

Brighid: “We’re from Dundalk, we’re Roman Catholics and we’ll be 50 years married this year. We wish other couples – gay or straight – could legally avail of civil marriage and have the opportunity to experience the love, protections and companionship that we have experienced.”

Paddy: “Twenty years ago, I probably would have voted ‘No’, but now that I know gay people and see the love and joy they can bring to life, I will be voting ‘Yes’. We worked hard for civil rights in Northern Ireland in the Sixties. Now it is time to support civil rights in the South.”

Brighid: “We’re grandparents and we wish that all our grandchildren are protected and treated as equals, in the playground and in the eyes of the law.”

Paddy: “I ask you to take time to consider and reflect on something. It could happen sometime in the future, that your son or daughter, grandchild, or great-grandchild will tell you they are gay. And when they asked you how they voted in this referendum, or whether you bothered to vote at all, what will you tell them? Will you tell them that you tried to make a difference?”

Brighid: “We have the opportunity to change things, for the better. I know that the ever-loving god that we believe in will say, we did the right thing and the Christian thing by voting yes for marriage equality.”

Thanks Barry The Hatchet and Rob McDonagh