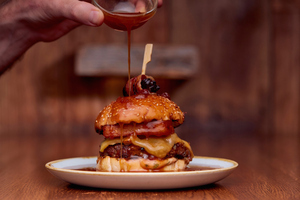 Yesterday, with THREE Christmas burger bundles from Gourmet Burger Kitchen to give away, we asked what burger YOU would like to see under your tree.

But there could be only three winners.

Essexhian*: “If Santa was a burger chef, I would order a burger consisting of Festive Joy Jelly (cranberry of course), 1 x turkey burger, 1 x sausage burger with Green Pesto and shavings of pistachio and parmesan , with a side dish of Pigs in Blankets + mustard dressing on Christmas morning……………….Yum Bum Be Jum!”

Karina: “If Santa was a burger chef, I would order a burger consisting of fresh lobster dressed in lemon mayonnaise, shredded lamb’s lettuce, king prawns in a little mild garlic and parsley sauce, crushed avocado, slices of vine ripened tomato and salad leaves, on Christmas morning.”

Bernie: “If Santa was a burger chef, I would order a burger consisting of sage and onion flavoured buns filled with succulent sliced turkey, maple smoked bacon, caramelized onion, a disc of stuffing, wilted spinach, and hint of mustard on roast potato slices, on Christmas morning. Yummy yummy yummy in my fat tummy.”

*can Essexhian drop us a line? The email we have for him/her is not working. Thanks.

Yesterday: The Bun Has Got Its Hat On 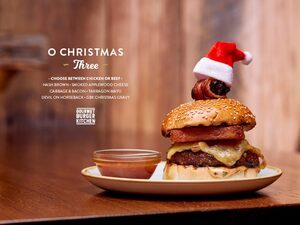 Following the success last month of our GBK ‘create a burger’ competition….

Gourmet Burger Kitchen are offering a special Christmas bundle which includes The Christmas Three burger, fries and a bottomless drink (soft drinks or fresh and fizzes) for €14.95 which is available all day long 7 days a week across all GBK locations including South Anne St, Temple Bar, South Willian, Swords Pavilions and Liffey Valley.

We have three (!) special Christmas Burger bundles to give away in a delicious competition.

Create the ideal Christmas Day Burger worthy of being flipped by Father Christmas himself..

Lines Must close at MIDNIGHT!

You may include fries.

Previously: Between YOUR Buns 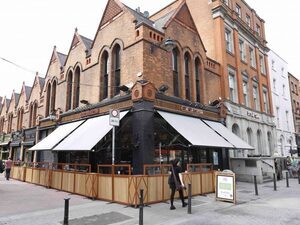 Two weeks ago, to celebrate the brand new makeover of the flagship Gourmet Burger Kitchen restaurant on South William Street, Dublin 2, we teamed up with GBK, INGLOT and Barbiere to give a Broadsheet reader the ultimate makeover giveaway for him/her and two friends.

Unfortunately, as ever, there could only be one winner.

Soon to be betrothed reader Paul won the prize with this wedded plea:

My two special friends Mel & Conor deserve a makeover and haircut followed by a meal at Gourmet Burger Kitchen because they’re coming to my wedding in August (Mel being the Best Man) and I don’t want any scruffy nerf-herders at my back at the altar.

We have taken the unusual step of declaring a runner-up and will furnish the following with a special prize.

Nancy: ‘My two special friends, Darren & Brian deserve a makeover and haircut followed by a meal at Gourmet Burger Kitchen because Darren has just landed himself a job with An Post, after a few hard years of being unemployed since leaving college and Brian is Godfather for his niece in a couple weeks and is showing no signs of getting sheered and groomed’