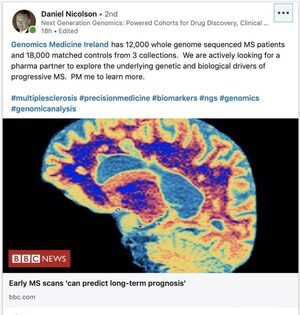 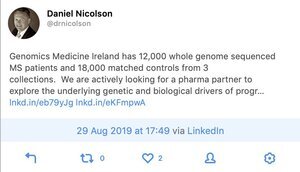 This appears to represent the sale of 30,000 Irish genomes to the highest bidder, without oversight from the Irish people.

Sorry, but this is not right. https://t.co/qsiNdHCK0K

I still had the LinkedIn and Twitter posts open, so attached are screenshots from @drnicolson pic.twitter.com/uJfLpcKR32

I saw it. I've a standing offer to act for free if anyone with MS wants me to make Data Protection queries on their behalf as to whether their genome is in this cohort (and how).

See thread for screenshots (of deleted tweet) @SimonHarrisTD Can you assure patients that their genomic/clinical health data has not been transferred to Genomic Medicine Ireland without informed explicit consent following testing-treatment @HSELive @hseNCCP ?
👇 https://t.co/IJXoIw5MQy