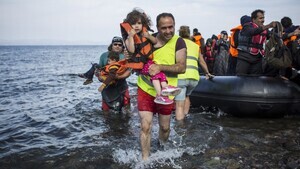 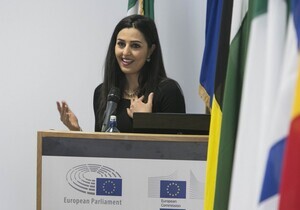 Will you be there Saturday afternoon?

Maybe stop by the Leviathan tent and meet Ghias and Razan, from Syria.

As Europe drags its heels on providing solutions to move refugees and asylum-seekers from Greece, thousands of men, women and children are living in filthy unsafe warehouses or tents, or sleeping rough under the relentless summer heat.

At Electric Picnic 2016, Amnesty International is raising awareness of the plight of refugees and asking festival-goers to join our campaign for change.

Amnesty Hour at Leviathan will highlight the experiences of Razan Ibraheem and Ghias Aljundi, both originally from Syria now living in Ireland and the UK.

When Razan came to Ireland to study in 2011, she never imagined that brutal conflict would mean she could not return home to Syria. She recently returned from volunteering on the Greek island of Samos.

“The hardest thing about being a refugee is when people make you feel unwanted,” Ghias says. He was imprisoned for four years and tortured for his journalism and human rights work, before fleeing to the UK in 1999. Today, he volunteers to help refugees arriving in Greece. He never expected that one day he would help rescue his own family.

Today, Europe is facing the biggest refugee and migrant crisis since the Second World War. Join us for Amnesty Hour at Leviathan to hear these powerful personal stories and to learn about how you can be part of our campaign for change.

Amnesty will be collecting signatures calling on the Greek Government to act swiftly to improve their living conditions and wellbeing.

Festival-goers will also have an opportunity to participate in our thumbprint action. Fingerprinting is the method used to identify asylum-seekers and migrants within the EU. Often, people are forced to giving fingerprints without their consent.

Amnesty International has found cases were children as young as three were forced to give their finger print as ‘proof’ of their consent to be returned from Turkey to Syria.

To express solidarity with refugees we are building a two-metre solidarity wall where festival-goers can leave their own thumbprint.

Join us for Amnesty Hour at Leviathan, at 3.45pm on Saturday September 3rd. Or follow the conversation online using the hashtag #IWelcome refugees.