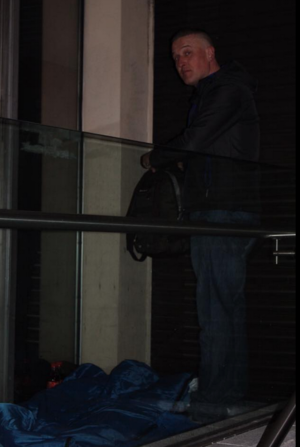 The new anti-homeless bars  erected outside of the Department of Social Protection’s offices in Gandon House, Amien Street, Dublin ensure those who used to sleep there can no longer do so.

This is my brother Patrick settling down to sleep  on Saturday] outside Gandon House. He is a rough sleeper, he is not addicted to drugs or alcohol but has mental health issues. He was evicted from the HSE last March after 22 years as a long-stay patient with severe and enduring mental illness.

As they were planning to evict him, his 22-year long diagnosis of schizophrenia was changed to personality disorder. If this is the case then was he was held unlawfully for all those years, against his will?

When he was evicted, he was given a piece of paper to contact emergency accommodation but he wasn’t even registered as homeless and could not access a bed. He lived with my family but it didn’t last due to his complex mental health needs. He is barred from many emergency hostels and, as a result, is sleeping on the streets.

Since his eviction he is a different person, he is in utter distress. He is institutionalised and extremely vulnerable and has attempted suicide. There has been a massive deterioration in him as he stopped taking his medication and is extremely paranoid and aggressive. His mental health has never been as bad.

He has a mild intellectual disability and has limited basic life skills. He went from 24/7 nursing care to the streets. A DCC social worker assessment carried out since his eviction reported he is unsuitable for supported community accommodation let alone independent living.

As a family we are heartbroken and sick with worry. He’s at massive risk and our fear is he will end up dead soon. We worry constantly about him and his whereabouts.

We have tried many times, and recently again, to get him admitted to have his mental health stabilised and back on medication. His GP said he was psychotic and wanted to admit him but his psychiatrist changed the GP’s mind when he rushed down with my brother’s file and said my brother was having withdrawals from alcohol.

He was then turned away from Beaumont A&E and refused admission as when they contacted his psychiatrist, he told them he has no mental illness, but the psychiatrist in Beaumont would not see him without three security guards present. He had a drug and alcohol test done in Beaumont which came back negative.

The Government closed the large institutions and did not open anything in the community to cater for the needs of people like my brother.

How many others are in a similar situation – where they say they have no mental illness in order to discharge them and put them onto the streets?

Many people and agencies in the community have told me there are many identical cases to that of my brother. An investigation needs to be carried out.

He is suffering everyday and is unable to cope due to this neglect. If anything happens to him, the HSE will be responsible. He has a right to treatment for his mental health and shouldn’t be punished for it.