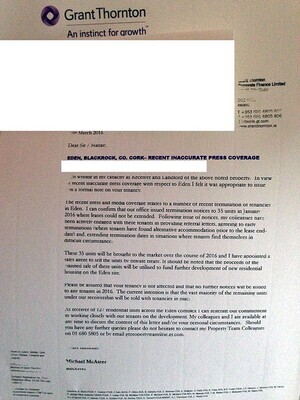 You may recall how, last Tuesday, RTÉ Radio One journalist Brian O’Connell reported that Grant Thornton had sent letters to 35 tenants in the Eden residential complex in Blackrock, Cork, in January – informing them that they had to leave their property by last Friday, March 18 – as the receiver intends to sell the properties.

The notices to leave were sent after the residents’ rent was increased by 25 per cent last July.

The Eden complex has around 300 units while Grant Thornton controls 127 in total.

It’s understood 20 of the 35 homes have been vacated.

Further to Mr O’Connell’s report last Tuesday, a letter was sent out last Friday by Grant Thornton to the tenants in the receiver’s remaining properties in Eden.

“The letter references the recent media coverage, it confirms that the initial 35 units are still to be sold but, crucially, in relation to the remaining properties, Grant Thornton now say that there will be no more sales in 2016, so it will be 2017, at the earliest, before any of the other properties are sold…They say, it’s the intention now of Grant Thornton to sell the remaining properties with the tenancies in place. It says in the letter, “please be assured that your tenancy is not affected”… It’s obviously good news for the remaining tenants in the 90 or so units who were very concerned.”

However, Celso Lemos, a Brazilian father-of-two, who had lived in Eden for five years and recently moved out after receiving notice to leave in January, told Mr O’Connell:

“The residents who are staying in Eden at the moment were waiting for an eviction notice this year. Apparently they heard that no further notice will be issued… We got no letter telling us, ‘stay calm, you’re sale is going to happen at a certain time of the year’. We were not told that we could stay in our property, we were just told that you must leave. So it’s already a change from what we had. However it’s too late for us. I have moved out, along with another 20 families, and there are still a few families in the area waiting to see whether they will get an extension.”

Meanwhile, in a statement, a Grant Thornton spokesperson explained the proceeds earned from the sale of the 35 Eden properties will be used to build more properties in the development:

“The instruction as Receiver encompasses a total of 127 units plus undeveloped land within the wider Eden scheme. In response to market demand, the Receiver now plans to sell the units located at the Eden complex. The proceeds of the planned sale of these units will be utilised to fund further development of new residential housing on the Eden site. The undeveloped site has capacity to facilitate more than 100 new dwellings.” 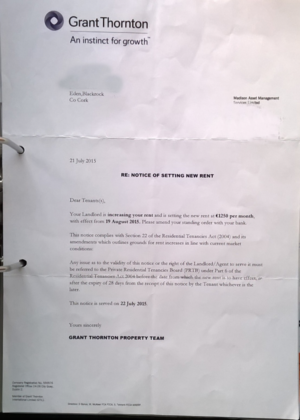 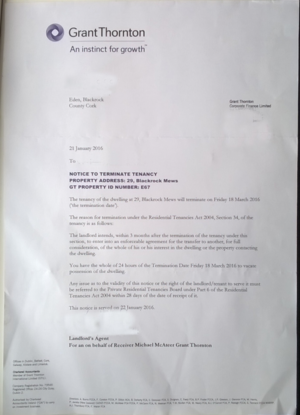 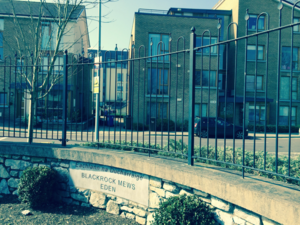 Journalist Brian O’Connell spoke to Keelin Shanley on Today with Seán O’Rourke this morning about how some residents renting in the Eden residential complex in Blackrock, Cork – which has around 300 units in total – have been told they must leave their property by Friday.

Grant Thornton – which controls 127 units in the Eden complex – told Mr O’Connell that it sent letters to 35 residents in January telling them they needed to vacate their apartment by March 18, 2016.

The letters sent in January followed letters sent last July, notifying the residents of a 25 per cent increase in rent.

The land was formally owned by the Ursuline order, they put the convent and 22 acres up for sale in 2001 and it was bought for €13million. Planning was secured for up to 550 units and they were going to convert the main convent building to apartments. That undeveloped land was then sold on for a reported €30million to Pierce Construction and they were to develop the large-scale Eden residential development. It was launched in 2005. Apartments at the peak were about €330,000 each.

It’s a very desirable location, it’s close to Blackrock, also close to the new IT hub in Mahon Point. Rent for a three-bed apartment was in an around €1,000 per month but in recent weeks some tenants have been told that there’s to be a sale of the units and they’ve been given eight weeks to leave their properties.

One tenant, Celso Lemos, a Brazilian father-of-two, has lived in Eden for five years. Mr O’Connell reported that Mr Lemos heard rumours that something was happening after Christmas but he found it hard to get information.

“They wouldn’t give me information. They would give me bits and pieces here and there but I had to leave because I got a letter, in mid to late January. We were given the statutory eight weeks to leave the property and there wasn’t much negotiation whatsoever…just a crude letter saying, ‘please leave by the 18th of March’.”

Mr Lemos said he’s now trying to convince his wife to move to either Holland or Germany, or move back to Brazil.

In response to questions from Mr O’Connell about the rent increase, a spokesperson from Grant Thornton said:

“Rents during 2015 (the process started April 2015) were realigned to market rental levels and tenants were all provided with adequate notice on same. A number of rental increase cases were lodged by tenants to the Private Residential Tenancies Board (PRTB)  and in each case the rent increase was upheld. The PRTB confirmed all requests for increases were in line with Market Rental levels.”

“In advance of the Receiver issuing notice to tenants, the Receiver waited until the amendment of the Residential Tenancies Act was enacted in December 2015. This act increased the notice periods to be provided to tenants thus ensured the maximum period was provided in cases where vacant possession was sought.”

“Lisney Estate Agents based in Cork has been appointed as the sales agent and any tenants who have shown interest in purchasing their property have been directed to Lisney.”