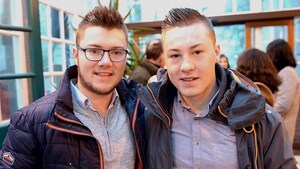 The two men, of Sandymount, Kilgarvan, are sons of Independent Kerry TD Michael Healy-Rae. They were convicted along with a third man, Malachy Scannell, of Inchinacoosh, Kilgarvan, of assaulting an English visitor to Kenmare during which he was punched in the face half a dozen times.

Mr Scannell was given two sentences of six months in jail, which were also suspended.

Judge David Waters said there was no doubt that all three would have been going to jail, were it not for the fact that they had no previous convictions. 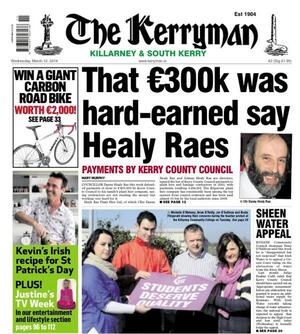 Councillor Danny Healy Rae this week defended payments of close to €300,000 by Kerry County Council to his family’s plant hire company, saying contractors are not stealing the money but working very hard for it. Healy Rae plant Hire Ltd, of which Cllrs Danny Healy Rae and Johnny Healy Rae are directors, topped the list of Kerry County Council payments to plant hire and haulage contractors in 2013, with payments totalling €294, 192. The Kilgarvan plant hire company has consistently been among the top earners from council contracts and has been paid almost €1.9m by the local authority since 2008. 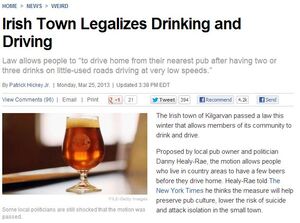 To be fair, we actually blame Jon Stewart.