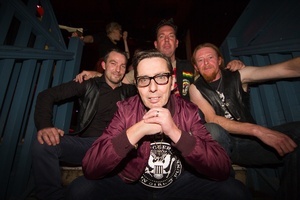 I just thought this unique video might be of some interest to your regulars.

It is the lead track of the recently launched 4 track Teenage Rebel EP by Dublin punk band Hooligan featuring Christy Dignam on vocals.

Entitled ‘Justa Nother Teenage Rebel’, it’s a cover of the original song by The Outcasts on Good Vibrations in 1978.

Christy & I cut our musical teeth in the white heat of those early punk days & The Outcasts were a particular favourite live at The Dandelion Market, The Project Arts Centre & McGonagles.

Released on Reekus Records by Elvera Butler, it has added significance as it was she who released Aslan’s legendary first single ‘This Is’ in 1986.

The CD for sale on general release next Wednesday 18th in Tower Records & available for upload also.