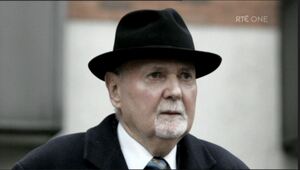 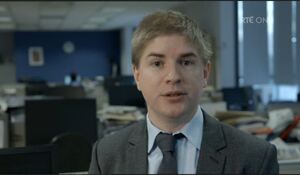 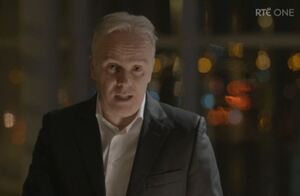 Richard Curran (above) and Tom Lyons (2nd pic) reported how Ernst and Young and solicitors McCann Fitzgerald were hired to carry out an investigation into the building society, following Michael Fingleton’s resignation in April 2009.

Mr Lyons and Mr Curran reported how the information contained in the subsequent report is so sensitive, successive governments have refused to publish it.

The report catalogues dire lending practices, disastrous risk management records and a virtually non-existent practice of keeping a coherent trail of documentation or records. And Mr Fingleton didn’t use a computer.

The documentary also briefly mentioned how Mr Fingleton courted the Press in the mid-1970s, with Paul Drury, from the Irish Daily Mail, recounting how he first met Fingers at one of his Christmas parties.

“Back then Michael Fingleton often made himself available to journalists. They came to his parties. He was available for quotes and comment. And, on top of that, he was happy to advance them money to buy their first homes. Irish Nationwide began building a profitable business providing savings accounts and mortgages and Michael Fingleton became the go-to man of the financial industry. His journalist contacts knew they could give him a call when doing a piece on banking.”

The documentary also heard from Olivia Greene, who was employed at INBS, but didn’t  mention that Ms Greene told a  2011 employment tribunal that, when it came to lending, there were certain criteria for the general public and a different set of criteria for people in certain social circles – including members of the government, media and close friends.

So why didn’t the documentary examine the role of a mortgaged-up media in Irish Nationwide’s rise? 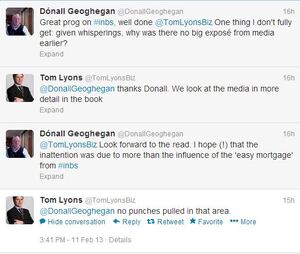 Previously: You Probably Wonder Why This Guy Seems Untouchable 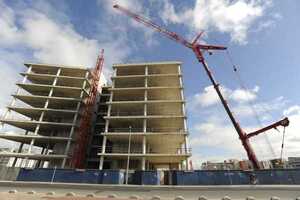 TheStory.ie has obtained a confidential plan submitted by Anglo Irish Bank/Irish Nationwide to the European Commission, which was put together by a working group from the Department of Finance, the NTMA, the Central Bank, Anglo and INBS.

The plan, dated January 31, 2011 was submitted to the European Commission for approval and was guided by the agreement reached between the Irish authorities, the EU, the IMF and ECB in November 2010. It outlines in detail the workout plan for the IBRC entity from now until 2020, under two headline scenarios – a base and stress scenario.