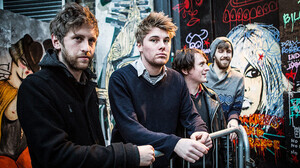 01. Taut, noisy and perpetually bothered, Dublin four-piece Girl Band have ascended quickly from the ranks of the Irish DIY scene and onto the world stage of independent music.

02. Debut full-length Holding Hands With Jamie came in last year on a wave of momentum generated by relentless touring, and a string of singles & EPs. It’s received massive critical acclaim, including the affections of The Guardian, among others.

03. Streaming above is the newly-released video for single In Plastic, directed by the band’s longtime visual collaborator Bob Gallagher. A tad more focused than the band’s trademark surrealism, it still manages to take potshots at Trump-era paranoia. In Plastic releases on limited 7″ July 8th via Rough Trade.

04. The single releases ahead of the band’s appearance at Chicago’s Pitchfork Music Festival on the 16th of July. Stateside readers might take note that the band also appears with GREYS at Baby’s All RIght in Brooklyn, New York on the 14th.

Verdict: You can love them or hate them, and they do tend to divide opinion almost effortlessly, there’s nothing quite like them. Absolutely white-hot live, also.