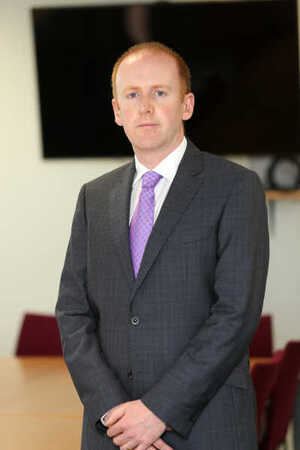 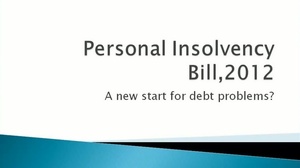 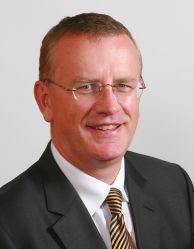 With credit due to poster HR Haldeman on Politics.ie here is a transcript of RTE R1’s Drivetime piece  with insolvency practitioner Jim Stafford last night.

You may need some tay.

Mary Wilson (reading a listener’s email): “What happens to my home if I
enter into a PIA?”

Jim Stafford: “Well, under the legislation the PIP {Personal Insolvency Practitioner] is to try and keep the family in their family home if at all possible. The PIP will have to assess the existing mortgage on the family home, if it’s a modest house, if it’s a trophy house.
“In practice, the PIP will also have to assess the type of house that might be needed for a professional person such as a solicitor, accountant or a hospital consultant as opposed to a house that’s needed by someone who is in the PAYE sector for example, so that, as a PIP, I would be making a very strong case, for example, that a solicitor should have a bigger house that accords with his professional status in society so that his neighbours and clients can see that, yes, this person is a good solicitor who’s is living in a good house etc. etc.”

Stafford: “Absolutely. The same as for hospital consultants, people like
that.”

Wilson: “Despite the fact that he’s insolvent?”

Stafford: “Despite the fact that he’s insolvent, because remember, if we want the solicitor to continue to earn money or the accountant or the hospital consultant it’s important that he has his tools of trade for example.”

Wilson: “Well, he may need an office, but he hardly needs a palatial house
in South County Dublin.”

Stafford: “Believe me, the clients who we have on our books are insisting they continue to stay in their palatial houses, now, it’s possible that some of them might have to down trade, but that all goes into the pot and at the end of the day the banks, the creditors have to agree to that process.” 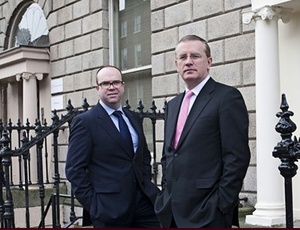 …Jim is frequently asked to speak about specialist Corporate Recovery and Insolvency topics by other institutes and organisations such as the Irish Institute of Credit Management, EBS, Goodbody Stockbrokers, IBRC, Bank of Ireland, Investec, KBC Bank… 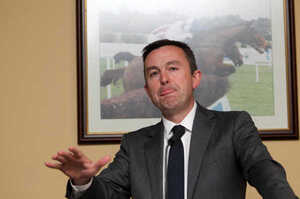 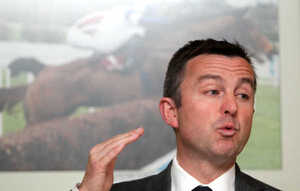 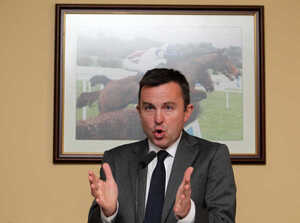 Minister of State for Public Service Reform and the Office of Public Works Brian Hayes TD pictured earlier at a seminar on private debt collectors in Dublin today. 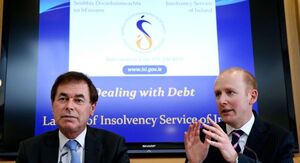 From the Financial Times:

“On Thursday Ireland’s Insolvency Service set out monthly spending limits for people seeking debt deals from their creditors, highlighting the impact austerity is having on Irish spending habits. A single person will be allowed just €247.04 a month for food, €57.31 for heating and €125.97 for “social inclusion and participation”, an expenses category that includes tickets for sporting events and the cinema.”

“A reasonable standard of living does not mean a person should live at luxury level, said Lorcan O’Connor, director of the newly established Insolvency Service of Ireland (with Justice Minister Alan Shatter above). “But nor does it mean that people should be punished and live only at subsistence level.”

“In most cases, people seeking debt deals will also have to give up private health insurance and their cars, although they will be able to keep their vehicles if they do not have access to public transportion.”

Previously: It’s Like Getting A Divorce In The 1980s 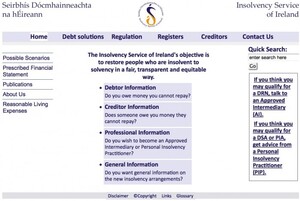 All you ever needed to know about repossession and pending homelessness in one place.

What about those controversial guidelines?

Agus as / i nGaeilge freisin. 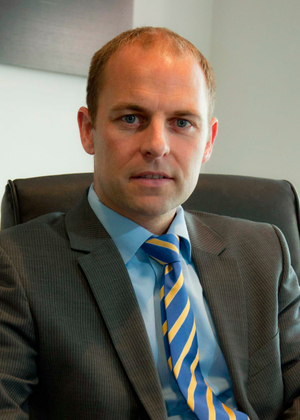 Without having to drink all that Mateus Rosé.

Anthony Joyce (above), a solicitor dealing with personal insolvency and bankruptcy issues, spoke to Marian Finucane yesterday morning about choosing bankruptcy in the UK.

Marian Finucane: “I don’t know if you heard Ben Dunne [railing against Ireland’s insolvency laws] the other day, he was very, very strong.”

Anthony Joyce: “I did, I listened to him and it was very strong what he…basically telling people was to go to the UK to go bankrupt and to bring their debts to a conclusion that way and use their insolvency legislation to actually just bring it to a conclusion.”

Joyce: “Yes, on a smaller scale…and he kept referring to the big developers as the big boys. And he’s sort of saying ‘if it’s good enough for them, it should be good enough for you’. And I’m at the forefront of dealing with people in negative equity and mortgage arrears and what I’ve been finding out over the last number of years is that they need a solution. And whenever people come into me, and they have a chance to go to the UK, so they’re mobile, they’re single, or anything like that, I say just ‘go’, ‘do it’, ’emigrate’.”

Joyce: “Absolutely. And, you know, we’re getting this personal insolvency legislation, it was passed just before Christmas. We’re now waiting for the Personal Insolvency Service to be set up. It was supposed to be in on the 1st of March, they kicked it back to the 1st of June and now there’s going to be difficulties introducing that. Now, we understand that it may not be the 1st of June either.”

Joyce: “Yeah, this is the sting in the tail. And this is where, again, it’s just legislation that’s been brought in, that any practitioners on the ground realise is not going to work. And it’s a five-year further application by the bank to extend their bankruptcy. So to get, OK, you’re discharged after three years, but after, for another five years, you have to make further payments. And the bank just makes an application. So if you’ve got a large salary, it’s pretty clear that the bank will say ‘look, we’re going go in and look for an application here for a further five years from your salary.”

Finucane: “Well, then what does the discharge mean?”

Joyce: “It means you can become a company director.”

Joyce: “Or you can borrow again..”

Finucane: “And would you pay the same money, or increased money? Or, if you improved your situation, would they come back to you for more, in the five-year period.”

Joyce: “Yeah, again. This..The difference between Ireland and the UK. In Ireland, it’s a form of punishment. And this attitude is ‘let’s punish the borrower because they made a mistake. In the UK, it’s let’s resolve this. I suppose the way I compare it is the way it was in the 1980s aswell where divorce, it was a case of a divorce in the 1980s was seen as a taboo issue.”

Joyce: “And now people are being, getting divorced, they’re actually having divorce parties, it’s not so much of a taboo.”

Finucance: “I haven’t been to one of those yet now I have to say.”

Joyce: “And it’s not as much of a taboo. At the moment, in Ireland, there’s a taboo when it comes to actual bankruptcy and the reality is that these, a lot of people were told ‘look, this is the thing to do, buy your house’. And this is why, the profile you would have seen this week of the people who are suffering are those people who are between 41 and 60. You know? It’s not the people that you would have expected, the younger people.” 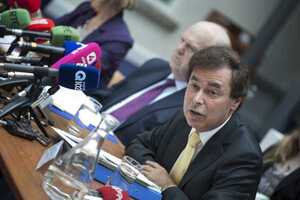 Minister for Justice Alan Shatter has warned banks that if they do not co-operate with the new personal insolvency scheme he would bring in new legislation to ensure their compliance. The Personal Insolvency Bill, a fundamental reform of the State’s antiquated bankruptcy laws, passed all stages in the Oireachtas last night and will be enacted before the end of the year.

He described the legislation as the “most radical reform since the foundation of the State”.

The new arrangements offer three separate court-backed mechanisms designed to help individuals with unmanageable debt – including mortgage debt – pay off a portion of their debt over a period of years, by means of an arrangement brokered by a licensed specialist known as a personal insolvency practitioner. It also provides for a new bankruptcy period of three years, rather than 12.

Among other things, it means Sean Quinn’s bankruptcy could end in 2015, rather than 2024. 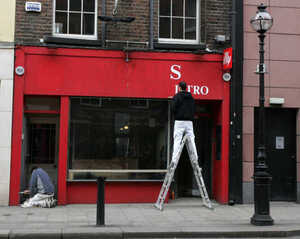 New statistics released by InsolvencyJournal.ie, reveal that total corporate Insolvencies for the month of April totalled 154, an increase of 15% compared to the 130 Insolvencies recorded in March 2012. 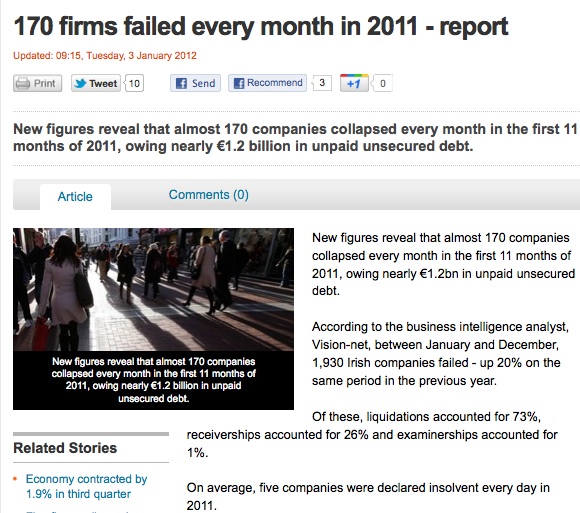